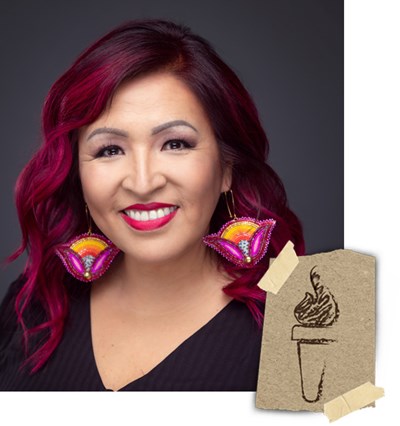 Angie Sanchez is a doctoral student in the Department of Geography, Environment and Spatial Sciences. Her dissertation research focuses on breastfeeding access for women in Indigenous communities throughout Michigan. The following content is repurposed from the College of Social Science.

My academic and career journey is actually extremely atypical. My entire career prior to coming back to school as a Ph.D. student has been in business as an analyst. However, three years ago, I had my first and only baby and, I knew that I wanted to breastfeed, but I didn't really know how. I had some struggles initially, so I reached out to a couple of nonprofit and community organizations to try to navigate what was going on. Somebody recommended that I see an International Board Certified Lactation Consultant who informed me that my son had a tongue tie and that I could fix it.

After having that experience, I realized that if I had been in my home tribal community in Northern Michigan —  I'm a member of the Grand Traverse Band of Ottawa-Chippewa Indians — I would probably have quit breastfeeding because I wouldn't have access to the same resources that I have down here, both physically and also financially.

There's no way I would have been able to pay out of pocket to have the consultant come out to my house nor would I have been able to pay out of pocket to have that pediatric dentist correct my son's tongue tie. The other local nonprofit and community resources that I used just don't exist up there. Friends of mine who had recently had babies in the last couple of years were running into similar problems. They wanted to breastfeed, they tried, they had issues, but they had nowhere to turn for help. I realized that this is a problem that needed to be addressed. That's what brought me to MSU for my Ph.D. program. I decided that this problem — access to breastfeeding support resources for Indigenous mothers in Michigan — is what I wanted to spend the rest of my life fixing.

There's an organization called the Indigenous Breastfeeding Counselor Training Program, which was started by two Indigenous lactation counselors. They realized that, as Indigenous people, we have a right to breastfeeding knowledge, and that was taken away from us by force through colonization. Their goal is to bring that knowledge back to Indigenous communities. Breastfeeding in our communities is viewed as ceremony, so they want to present this practice through an Indigenous lens and restore that tradition.