Each time a bag of potato chips is opened in the United States, there is a one in four chance that it’s filled with Michigan-grown potatoes.

Michigan is the largest producer of potatoes grown for the potato chip industry, and more than 70% of the state’s annual 1.7 billion pounds of potatoes go toward chip production.

The booming industry has not come about by accident or coincidence. A concerted effort made by industry stakeholders, spearheaded by Michigan State University Extension and MSU AgBioResearch, and coordinated by the Michigan Potato Industry Commission, has built a partnership that is growing the industry.

Before potatoes get turned into chips, a lot of work is done to pick the best varieties for the job. Chris Long, MSU Extension potato specialist, leads the Potato Outreach Program, which supports potato growers by conducting on-farm research and demonstration trials on all aspects of potato production. Long works with local and national breeding programs to identify superior varieties by first testing them on farms and then taking the top performers to processors.

“To me, the relationship is like the spokes of a wheel,” Long says about the Potato Outreach Program. “The MPIC is a tremendous funder of my research, but they also set priorities and the bull’s eye for what we are trying to accomplish. AgBioResearch provides the infrastructure, and I am like a bridge builder between these research priorities, researchers at MSU and the growers.”

MSU and the potato commission work together to promote and support the state’s potato industry. MPIC provides funding for research and specialist positions at MSU and also works with stakeholder groups to generate funding through programs such as Project GREEEN. 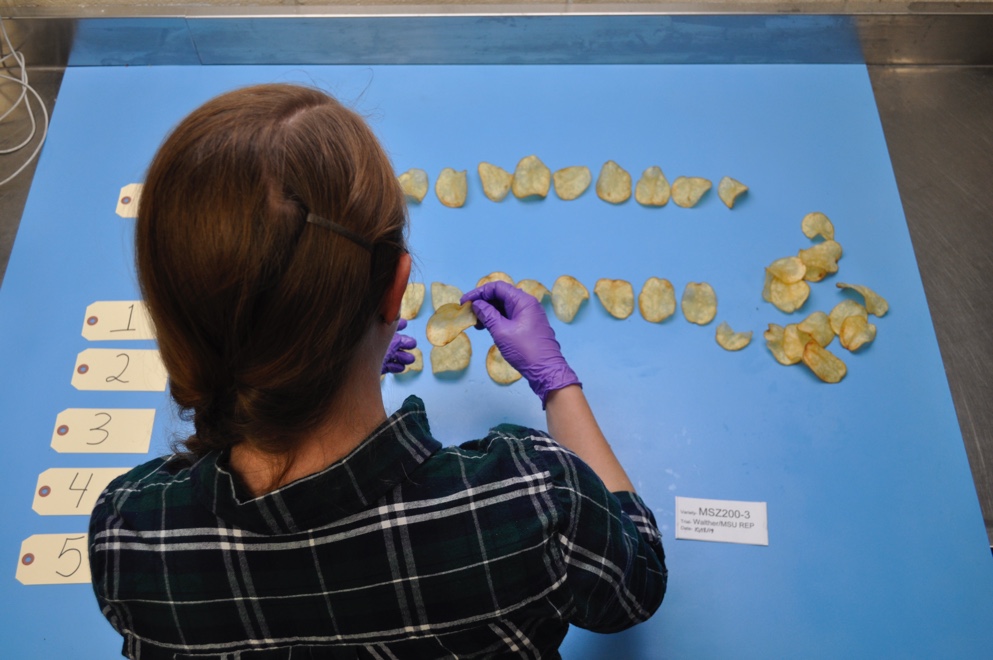 Trina Zavislan, a research assistant with the MSU Potato Outreach Program, examines the chip quality of a batch of potatoes processed during Chris Long’s potato trials
Without the research and outreach coming out of MSU, the state’s potato industry could be 20 years behind from where it is now, says Kelly Turner, MPIC executive director. “The research really is what has moved Michigan forward and put us on the map in the potato industry nationwide,” Turner says. “MSU is nationally recognized for the work that they do. When talking to some of our largest growers, they have placed their success squarely on the shoulders of the research that’s been done at MSU.”

Discussing the particulars of potatoes

MPIC also facilitates conversation and cooperation among all stakeholders in the industry. “What MPIC really does is bring everybody together, from breeders to seed developers to processors to growers. They put us all in a room together, and we have really good conversations about what we need,” says Phil Gusmano, vice president at Better Made Snack Foods. “MSU will come in and say, ‘These are the varieties we have up and coming, and these are their attributes.’ Then we talk about what works and what doesn’t from the production side. When breeders get to listen to what the end users want, a consciousness is developed of our production needs and the end consumer needs.”

Sklarcyzk Seed Farm in Johannesburg, Michigan, owned and operated by Ben and Alison Sklarcyzk, has been working with MSU through Potato Breeding and Genetics Program Director David Douches for decades. Ben’s parents, Don and Mary Kay, started working with MSU in the early 1990s, developing potato varieties through research and testing on their farm. Douches and MSU remain a fixture at Sklarcyzk Seed Farm, which has grown to generate as many as 6 million minitubers each year. Sklarcyzk Seed Farm’s hydroponically produced minitubers are shipped throughout the country, as well as to Canada, Chile, Thailand, Brazil and the Middle East. “I think everyone within MSU and the potato industry really works well together to improve the industry,” says Alison Sklarcyzk, an MSU animal science alumna. “The MSU team is open to assist us and provide us with material, but they also do a lot of DNA testing to confirm the purity and integrity of our varieties for our customers.”

MSU’s potato breeding program provides the seed farm with varieties that have allowed the Sklarcyzks to expand their production and customer base. But the relationship is mutually beneficial. “When Dr. Douches got to Michigan State, we started working together and growing some of his varieties. So, he would do the breeding, and our operation then would receive the plant material, produce the minitubers to then send back to him,” says Ben Sklarcyzk, a 2003 MSU graduate in agribusiness. “As the years progressed, MSU started to do more of those processes in-house, so we worked with them and helped them establish their own greenhouse facility.” 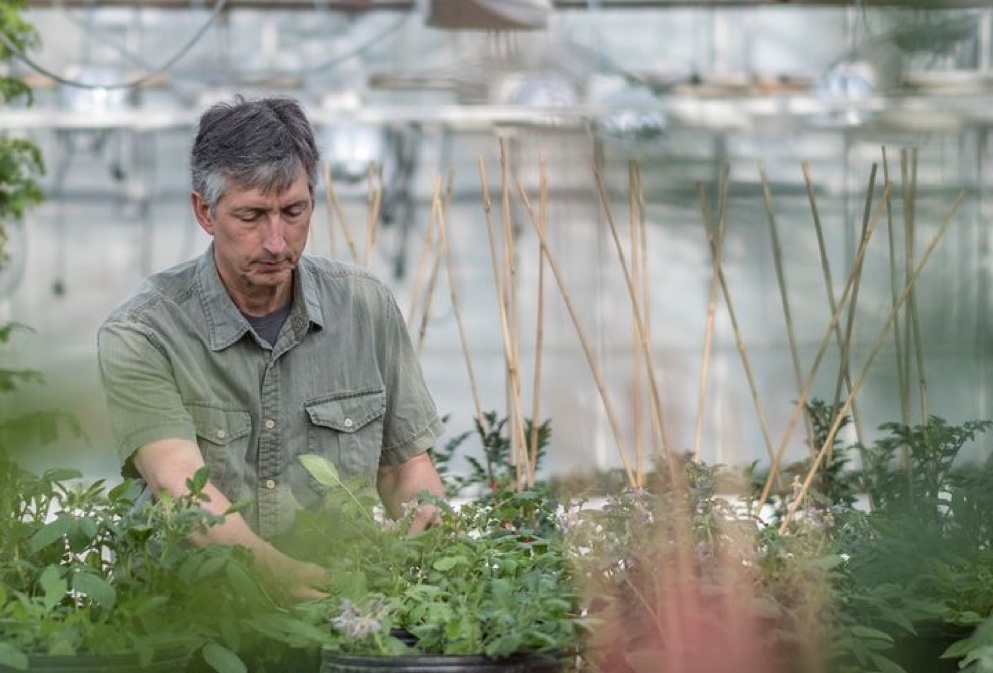 Detroit-based Better Made Snack Foods has built its success by embracing its Michigan roots and sourcing the bulk of its potatoes from Michigan.

The company uses 60 million pounds of potatoes each year and has worked closely with the MSU breeding program.

“MSU looks for our input on different traits that we want to be bred into potatoes,” says Better Made’s Gusmano. A major advancement in varieties has come from breeding potatoes that can be stored longer. 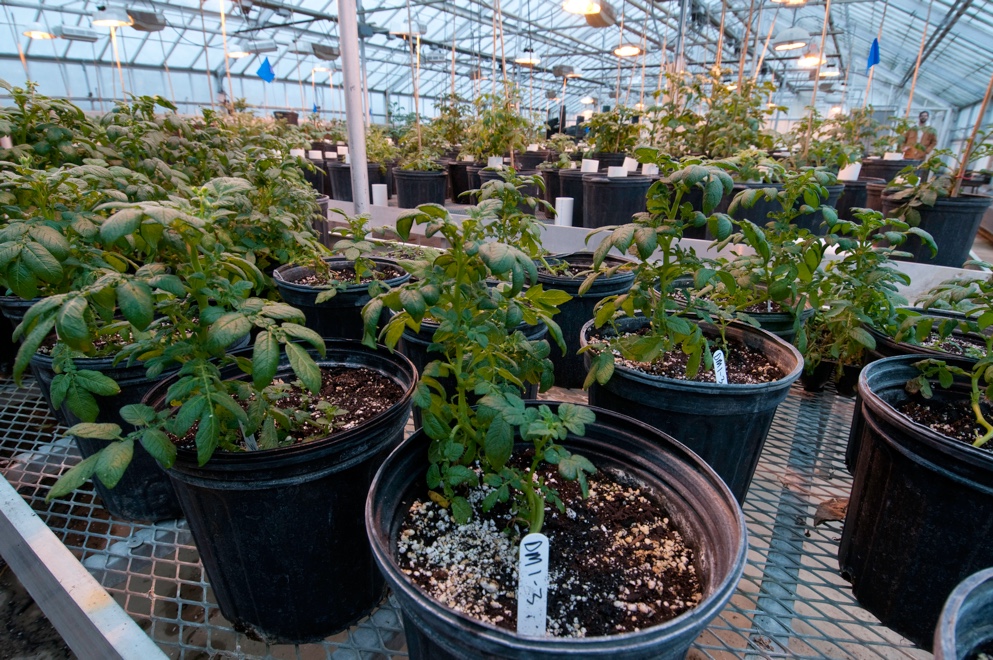 Plant scientists conduct breeding experiments at the MSU Potato Breeding and Genetics Greenhouse.
“As little as eight to 10 years ago, we could only store potatoes through February,” Gusmano says. “Through varieties that have come out since, we can now store potatoes into July.

That allows our local growers to have a longer selling window. That helps them generate revenue and keep people employed throughout the year. It also helps keep our costs down.”

Better Made welcomes breeders, growers and MSU students and researchers to come in and learn about its processes, Gusmano says.

“They get an education on what we do. MSU can come in here when we do a test load for them, and they can see the results of their labor,” he says. “They’re able to bring not just professors but also some of the students, and really have a good concept of the process from start to finish.

“It helps because they can come in and see where our bottlenecks are. For example, if they have a variety that grows really large tubers, that does not work for us, because it may make the greatest looking chip, but if it doesn’t fit in the bag, that’s a problem.”

Adapted from a story by Justin Whitmore for Futures Magazine