We live in a critical time when bacteria have demonstrated an ability to develop resistance to every known antibiotic, and new antibiotic development has been nearly nonexistent for more than 30 years. But there is hope. Michigan State University researchers are working to identify new antibiotics and treatment methods to combat life-threatening bacterial infections.

"[Universities] tend to be able to take more risks with our research and pursue projects that companies deem too risky," says Richard Neubig, chair of the MSU Department of Pharmacology and Toxicology.

"With the students and resources the university has available, researchers are able to ask questions that just wouldn't be asked in industry," Neubig says. "We may end up exploring 20 to 30 different areas, and a large fraction of those may fail. But the one that hits can really let us move in new and exciting directions." 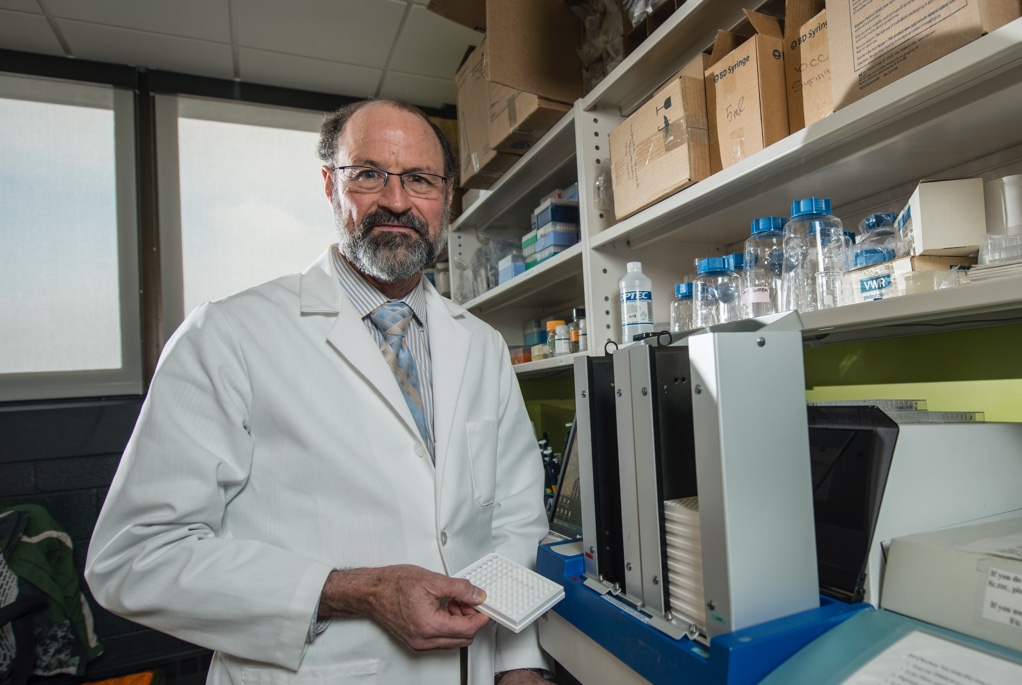 Richard Neubig is chair of the MSU Department of Pharmacology and Toxicology. While high costs have deterred many pharmaceutical companies from investing in new antibiotic development, MSU is uniquely positioned to lead the way due to its vast expertise in the colleges of Agriculture and Natural Resources, Human Medicine, Natural Science, Osteopathic Medicine and Veterinary Medicine, to name a few.
"Drug discovery is a team sport," Neubig says. "Support from the MSU Foundation's Strategic Partnership Grants has brought together an exciting team from plant biology, drug discovery and microbiology to find unique compounds to tackle important antimicrobial resistance problems like methicillin-resistant Staphylococcus aureus, or MRSA, and other resistant microbes.

"When we can bring all of these different aspects together, it allows us to attack problems in ways that haven't been done before."

Christopher Waters, professor in the MSU Department of Microbiology and Molecular Genetics, is striving to develop antibacterial therapies through his research on bacterial biofilms. Biofilms are generated by bacterial colonies that attach to surfaces and secrete material that shields the bacteria from environmental stresses, including immune system response and antibiotics.

Biofilms form in a variety of diseases, including diabetes, cystitis, infections from medical implants and cystic fibrosis.

"There are a couple of different approaches to treating a bacterial infection," he says. "You can develop new antibiotics that have new targets. Or, you can take known antibiotics and add another compound to make the antibiotics work better against antibiotic-resistant bacteria. Those compounds are called antibiotic adjuvants. We decided to go this route to see if we could develop antibiotic adjuvants specifically looking for antibiotic compounds that enhance the destruction of biofilms."

Waters has screened approximately 6,000 molecules, testing their ability to attack and destroy biofilms. Several compounds have emerged as potential solutions. The most promising is triclosan when combined with the antibiotic tobramycin. Triclosan enhances the ability of tobramycin to kill the bacterial pathogen Pseudomonas aeruginosa, a major biofilm-forming pathogen.

"We found that triclosan enhances antibiotics known as aminoglycosides," he says. "Neither [triclosan or aminoglycosides] working alone against biofilms are very effective, but if you combine them, they're 100 times more effective."

Waters said he hopes to ultimately treat a large number of biofilm-related illnesses, including pneumonia and cystic fibrosis.

Tuberculosis is the leading cause of death from infectious disease. Caused by the bacteria Mycobacterium tuberculosis, TB results in one death every 20 seconds. Additionally, an estimated 2 billion people worldwide are infected with latent TB, which has no symptoms.

Robert Abramovich, associate professor in the Department of Microbiology and Molecular Genetics, is focused on identifying the dormant MTB that causes latent TB and developing new antibiotics to destroy the bacteria before it develops. He said identifying and eliminating latent TB is key to both preventing the illness and reducing resistance.

"TB treatment takes six months," he says. "We can kill the bacteria that are replicating — that are active — pretty easily with antibiotics. The extended course is to make sure we clear out the bacteria that are dormant and harder to kill with antibiotics. This extended treatment, due to dormancy, leads to drug tolerance. If we can stop bacteria from establishing dormancy, we can stop creating drug tolerance." 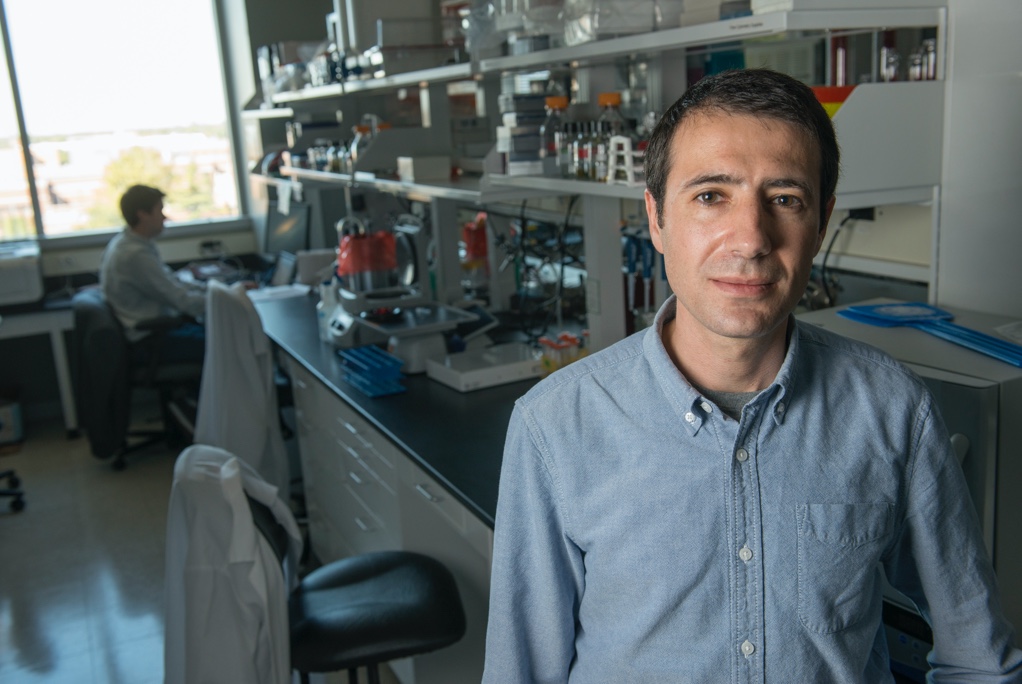 Robert Abramovich is conducting research designed to create new antibiotics to treat Tuberculosis.
Abramovich received the 2014 MSU Innovation of the Year Award for developing a strain of MTB that produces a glow when it goes dormant. Since then, he and his research team have screened more than 250,000 compounds. In 2017, Abramovich published a paper identifying six compounds that successfully target dormancy and have the ability to destroy dormant TB in the lab and could lead to the development of new antibiotics.

Ultimately, Abramovich is hopeful that one of the compounds will go to clinical trials and eventually into production. Even so, it's still an upward battle.

Abramovich credits the role Neubig, his colleague in the College of Natural Science, and the MSU Drug Discovery Program for testing thousands of compounds in its high-throughput screening lab. The Assay Development and Drug Repurposing Core in the Department of Pharmacology and Toxicology assists MSU researchers with drug discovery. It is a campuswide resource that provides expertise in screening compounds at a very rapid rate.

"When I came to MSU six years ago, I received tremendous help from the university to build the high-throughput screening lab — the ADDRC — and, more recently, the Medicinal Chemistry Core that are needed to take compounds we find, optimize them and make them viable as potential drugs," Neubig says.

Thomas Dexheimer, ADDRC director, who brings critical expertise in preclinical drug discovery, and Edmund Ellsworth, Medicinal Chemistry Core director, who spent decades working on drug development in the pharmaceutical industry, are leading the way on assisting researchers across campus, according to Neubig. 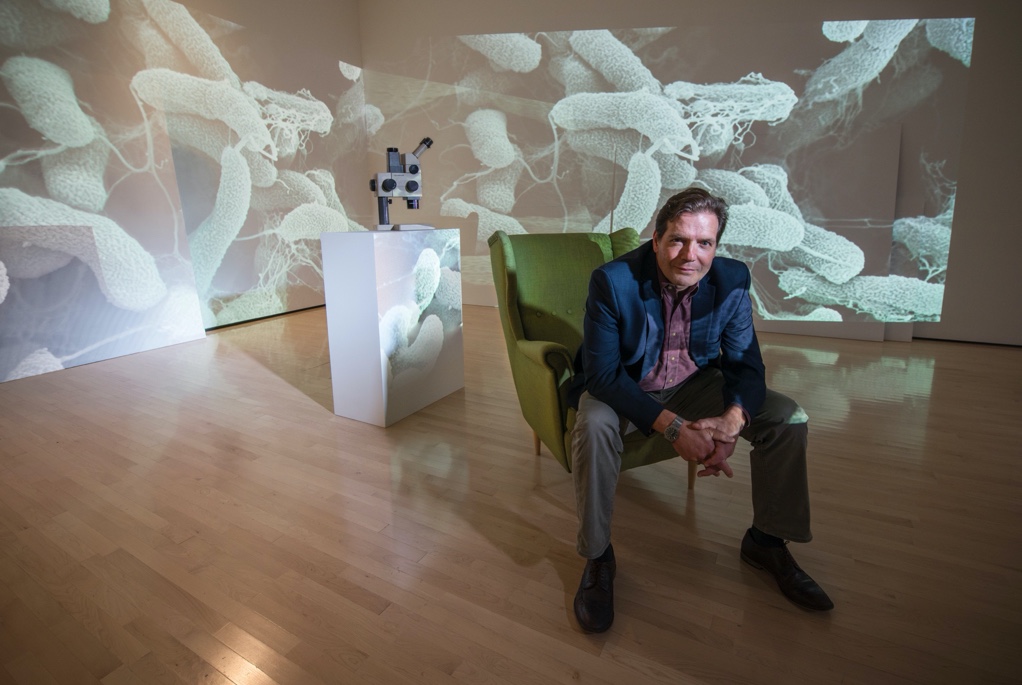 "We are moving toward precision-based targeting where we discover how the bacteria function in order to disarm them, not necessarily to kill them," says Victor DiRita, Rudolph Hugh Endowed Chair in microbial pathogenesis whose lab studies the Gram-negative bacteria devastating hospitals known as Carbapenem-Resistant Enterobacteriaceae. "This approach is smart and targeted — this is a laser beam, not a sledgehammer."

"With some microbes, we have identified small, potentially therapeutic molecules that stop the production of an important toxin by understanding the important microbial pathways that turn on toxins and cause the host problems," DiRita explains. "This next generation of antibiotics won't kill bacteria — they will protect it from being lethal."

The Hammer lab aims to limit the infectious capacity of the Gram-positive pathogen methicillin-resistant Staphylococcus aureus, or MRSA, by screening MSU's growing library of new plant-based compounds for ones that will inhibit its metabolic pathways.

"Through our research, we know that S. aureus has an interesting pathway of becoming resistant to several classes of antibiotics — it switches its metabolism to a small colony variant, or SCV," Hammer says. "This is somewhat good news because our work, and work done by many other labs, demonstrated that S. aureus only uses two metabolic pathways to proliferate during infection, aerobic respiration and fermentation. SCVs rely on fermentation."

"We can force S. aureus into a fermentative, SCV state with a class of drug treatment called aminoglycocides," Hammer says. "My research program is interested in finding compounds in our chemical library that selectively kill these SCVs to design a combinatorial therapy that potentiates the activity of the aminoglycocides."

"Fundamentally, we are biologists who are curious about bacteria and how they work and, if they are harming people, how we can stop them from working," DiRita adds. "If this is a space race, we are John Glenn circling the earth."

MSU Biomedical Engineering and Chemistry Professor Xuefei Huang strives to provide a complementary approach to antibiotic discovery through his work on vaccines.

Huang is examining the role carbohydrates play in inflammation, tumor metastasis and both bacterial and viral infections. He strives to create vaccines for a variety of diseases, including bacterial infections.

"Our interest is finding a way to target carbohydrates to generate immune responses that will protect against bacterial infection," Huang says. "The vaccine approach is complementary to antibiotics, in the sense that the reason we are using a vaccine is to prevent the infection, and antibiotics are used to kill the infection." 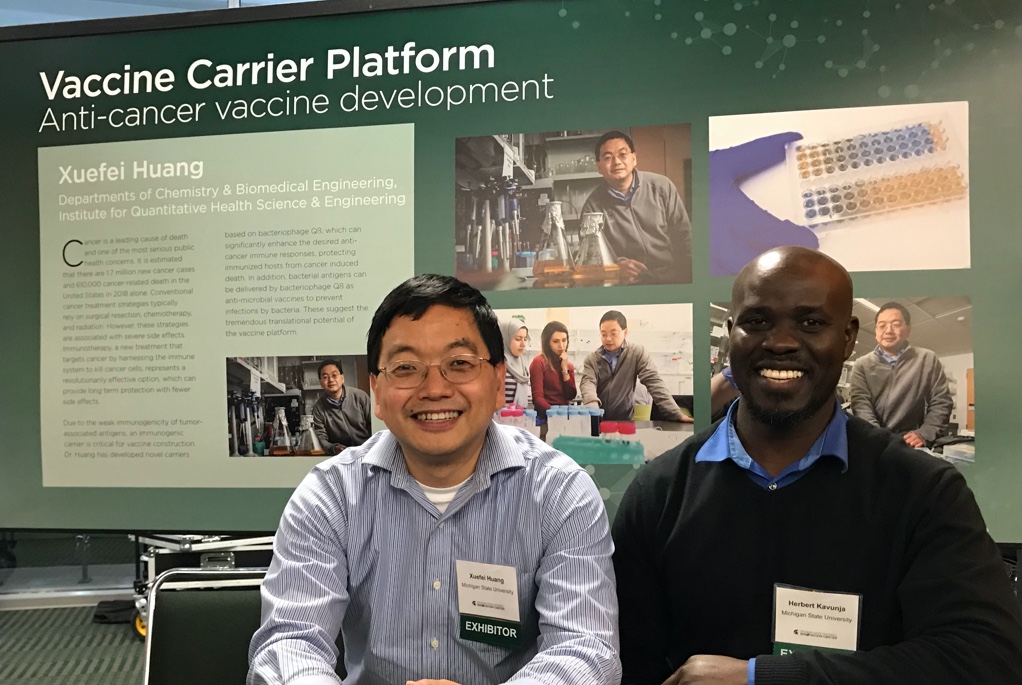 "Creating new vaccines does not mean we shouldn't develop new antibiotics," Huang says. "I don't think any single lab can take on the task of eliminating infections successfully. At MSU, we are in a good position with the expertise we have on campus and the collaborative environment."

Staying ahead of the game

The ultimate goal is to develop therapies far enough along to establish clinical trials and ultimately generate new antibacterial therapies. Abramovich believes that's when the pharmaceutical companies can step in and make a difference.

"I like to use a football analogy," he says. "In academia, we can sort of get the ball down the field and into the red zone. At that point, to get a touchdown, you probably need some industry help to get it to the end zone. If we can get it to that point, industry has a good shot at succeeding."

Waters has partnered with TSRL, Inc., based in Ann Arbor, to develop his triclosan/tobramycin compound. Waters, Abramovich and Huang each have developed start-up companies designed to further their research into clinical trials and, eventually, drug therapy production.

"I can be an expert in signaling and biofilms, but I really don't know much about drug development. So, having people who know about drug discovery, such as Rick Neubig, Tom Dexheimer and Edmund Ellsworth, brings in a whole new perspective that I don't have.

"It's kind of like the triclosan and the tobramycin," he says. "Either one alone is not that effective, but when you bring the two together — it works."

Adapted from a story by Justin Whitmore for the College of Agriculture and Natural Resources. College of Natural Science freelance writer, Sarah Zwickle, contributed to the article.
Health Life Science and Technology