Nic Antaya, an MSU senior studying journalism, has been named the runner-up in the National Press Photographers Association, or NPPA, Student Photographer of the Year contest. The final award comes after success in quarterly contests held by the NPPA in topics ranging from general news, features, spot news and portraits.

Antaya has worked for media outlets across the United States, including recent work at The Boston Globe. He studied at the Danish School of Media in Aarhus, Denmark for his final semester of university education.

The following is a Q&A with Antaya, as well as a look at his award-winning work.

What was your reaction to being chosen as runner-up for the NPPA Student Photographer of the Year contest?

It’s an honor to be awarded runner-up Student Photographer of the Year by the NPPA Student Photographer of the Year Contest. To be acknowledged for the work I have made is a good feeling. I have seen a lot of growth in myself as a photographer since I first began making photos roughly 5 years ago. More importantly, I have grown a lot as a person in this time as well. There are a lot of people who have helped me grow into the person I am today.

I first purchased a camera in May 2015 and fell in love with photography. The following year I started working at MSU’s student newspaper, The State News, and also changed my major to journalism.

What is the application process for the NPPA quarterly clip contest? And for the final photographer of the year contest?

The NPPA Quarterly Clip Contest asks for students to submit work every 3 months, for a total of 4 submissions that are judged alongside of other students work.

You must be a member to enter. I was announced runner-up Student Photographer of the Year as a result of placing in multiple categories in each quarter.

It seems that you’ve had a few jobs, internships that have taken you around the country. Could you touch on those experiences a bit?

I’ve completed three internships during my time as a student.

My first internship was at The Grand Rapids Press/MLive.com in Grand Rapids, Michigan. At the time, I worked with three photographers: Neil Blake, MSU alumnus Cory Morse and fellow intern Mike Clark. This gave me an opportunity to focus in on working for a newspaper full time. Working full time allowed me to not worry about school and hone in on making storytelling images.

My second internship was at The Herald in Jasper, Indiana. At that time, I worked with the visuals editor and MSU alumnus Dave Weatherwax as well as staff photographers Brittney Lohmiller and Sarah Ann Jump. The Herald staff taught me to slow down my photographic process and find moments. I also improved my understanding and ability to tell photo stories by contributing to the Saturday Feature. The Herald has a long-standing tradition of publishing the Saturday Feature, which is a weekly picture story that especially emphasizes the visuals.

My most recent internship was at The Boston Globe in Boston. This was the biggest newspaper staff I worked with. The Director of Photography, Bill Greene, as well as other photo editors pushed me in my growth as a daily news photographer. My time at the Globe pushed me in making strong images by having multiple assignments every day all throughout New England. I covered a lot of general news, including a fair amount of politics. My time in Boston broadened my skillset as a photojournalist.

How has your time as a Spartan impacted your photography?

When at MSU, I spent a lot of my time working at The State News. The State News provides student journalists many opportunities to learn and grow. During my time at The State News, I covered the 2016 Republican and Democratic National Conventions, both NCAA Women’s and Men’s basketball Big Ten Tournaments, the sentencing of ex-MSU and ex-USA Gymnastics doctor Larry Nassar, the 2019 Final Four in Minneapolis and many other things. I also had the opportunity to document and share the story of an MSU student single mother, Brittany Slater, with her son, Logan, in the months leading up to graduation.

Professor Judy Walgren joined the MSU community in the fall of 2018. I had the privilege to work with her on an independent study in the spring of 2019, which expanded the way I think about photography. I’m excited to see how her teachings inspire MSU students who are pursuing photojournalism.

Any closing thoughts on your experiences?

Getting to where I am today has been made possible through the many friendships I have made along my journey. The friends we surround ourselves with help us grow – both personally and professionally. I think growing in both ways is equally important.

I am also grateful for the people who I have photographed. Being a witness to the human experience and sharing stories is an honor.

I still have a long way to go with plenty to learn. 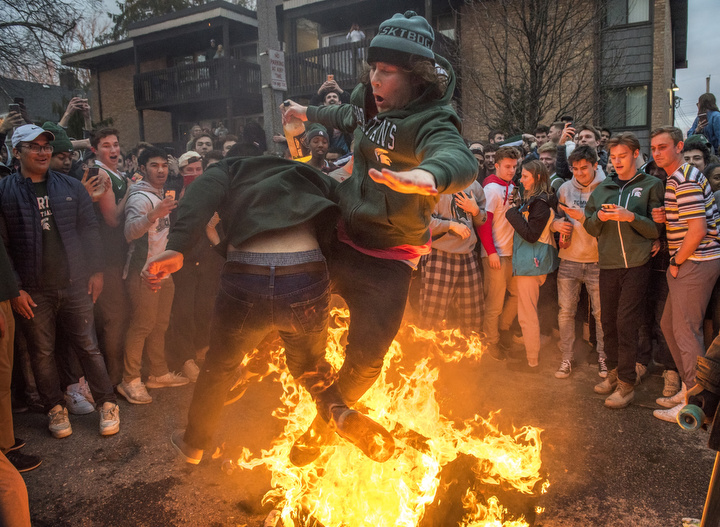 Nathan, 21, collides with a fellow Michigan State University student while jumping over a burning couch in celebration of MSU's victory over Duke in the NCAA Men's Division I Basketball Elite Eight at Cedar Village Apartments on March 31, 2019. Michigan State University students have a tradition to gather at Cedar Village, an apartment complex that borders MSU's campus and burn couches after notable wins from their sports teams. 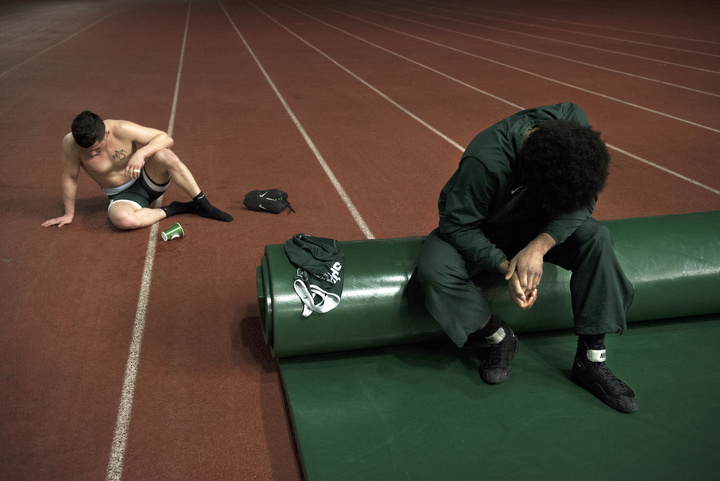 Michigan State freshman 149-pounder Jaden Enriquez, left, rests after losing his match while Michigan State freshman 184-pounder Cameron Caffey waits for his match to begin on January 11, 2019 at the Jenison Field House in East Lansing. "I'm thinking about how I'm going to move, how I'm going to set things up," Caffey said. "If my reaction time is good enough, all of those things will just follow through." Caffey went on to lose his match, which concluded the meet with MSU losing to Illinois 18-15. 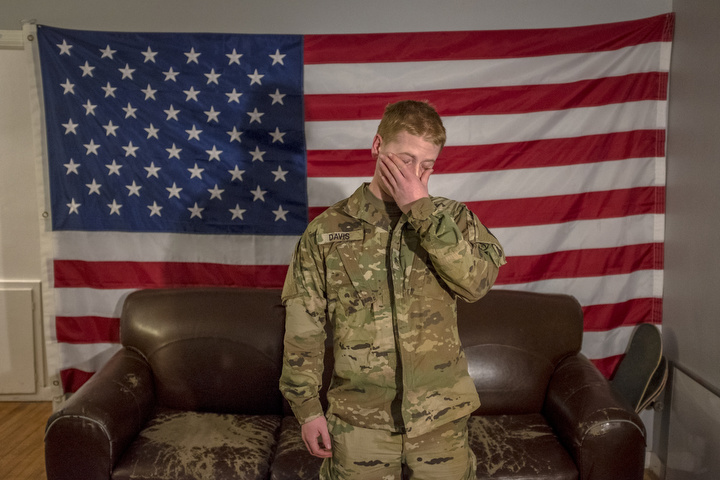 Cadet Davis rubs his eyes due to exhaustion after arriving home from his three days of overnight field training exercises with the Michigan State University Army ROTC program at Fort Custer on Saturday, March 23, 2019. 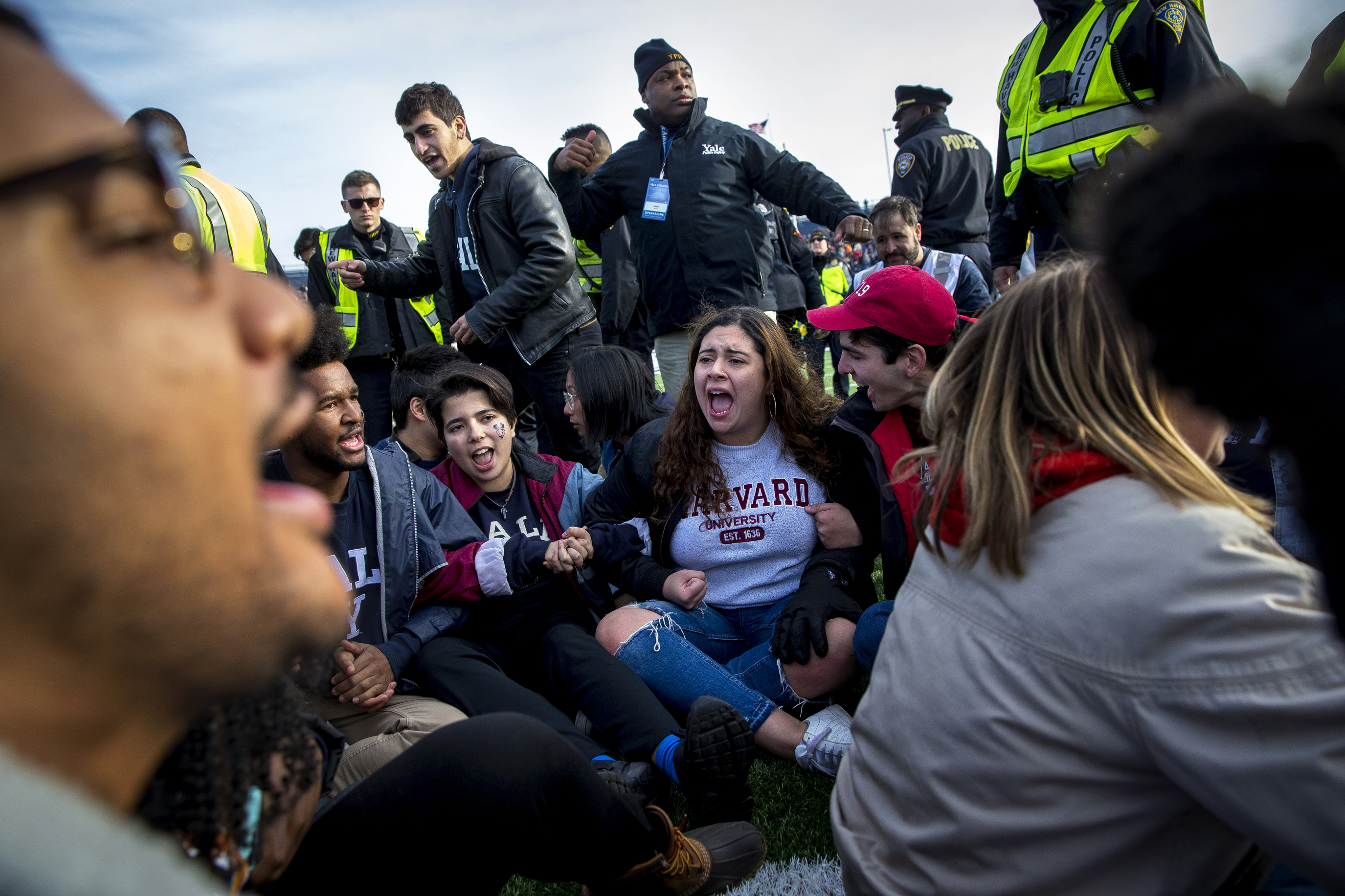 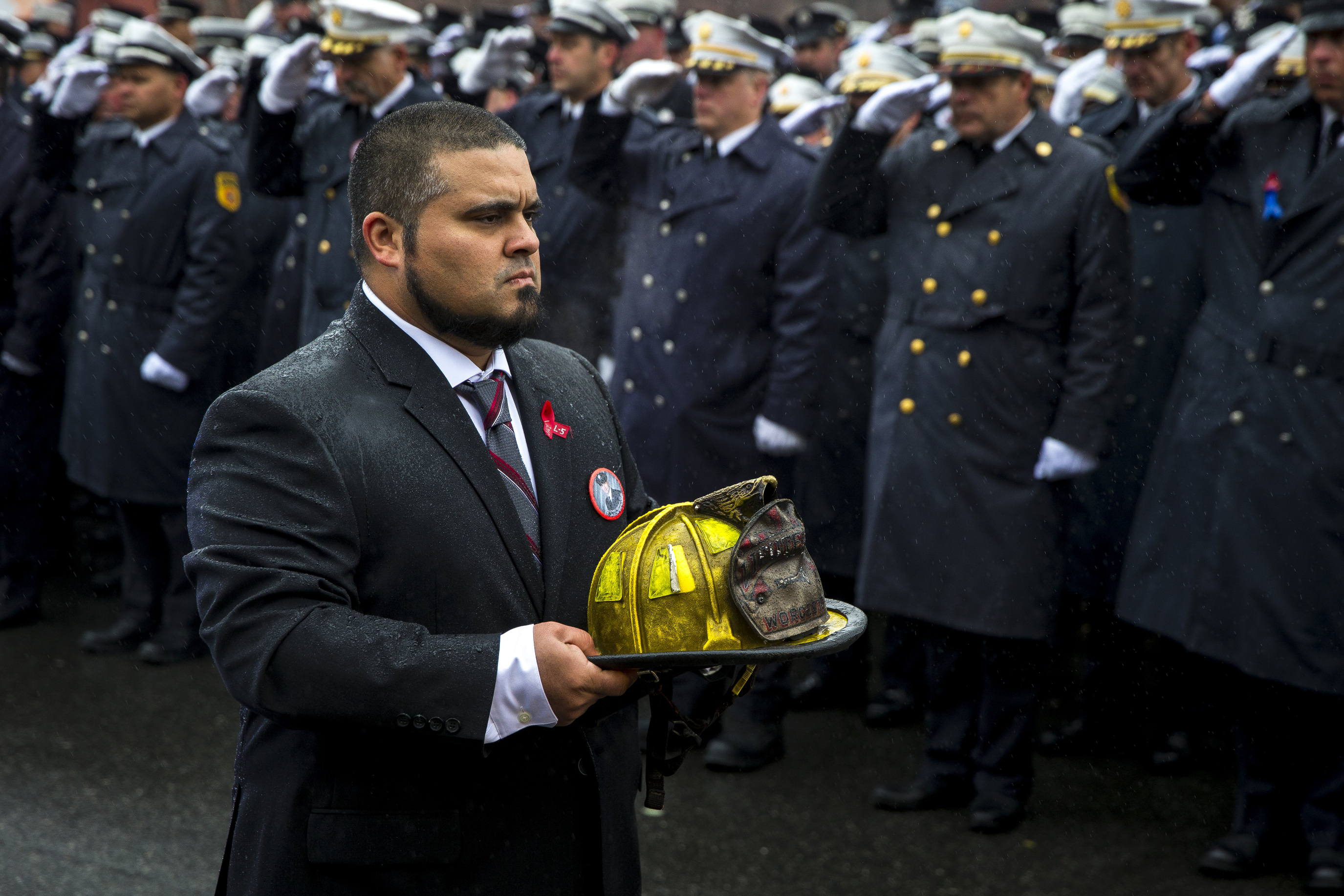 Worcester, MA - The helmet of Worcester Fire Department Lt. Jason Menard is carried during the procession of the funeral for Menard at St. John's Catholic Church in Worcester, Mass. on Monday, Nov. 18. 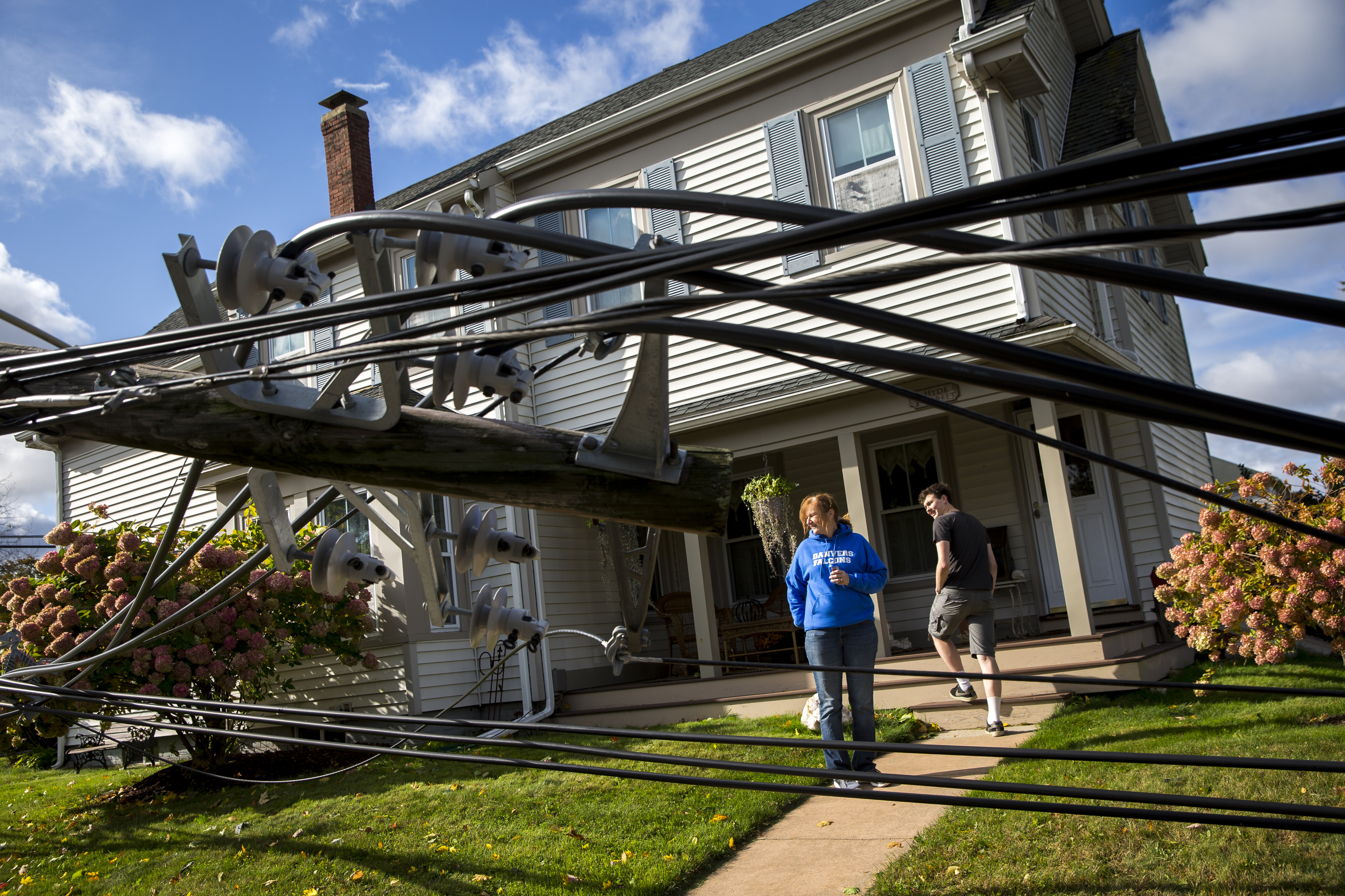 Peggy Filip, left, and her son, Michael Filip, 17, look at fallen power lines outside of their home of 20 years at the corner of Hyde Street and Pine Street in Danvers, Mass. on Thursday, Oct. 17.

Nic Antaya, an MSU senior studying journalism, has been named the runner-up in the National Press Photographers Association, or NPPA, Student Photographer of the Year contest

Nic Antaya, an MSU senior studying journalism, has been named the runner-up in the National Press Photographers Association, or NPPA, Student Photographer of the Year contest

One of the great mysteries for physicists is why there is more matter than antimatter in the universe. To help solve this mystery, an international collaboration of 500 members including MSU scientists, published a paper in Nature that suggests that differences between neutrinos and antineutrinos might help to shed light on this.