Halo blight on a hop cone. Courtesy of Doug Higgins.

As Michigan’s hop industry grows, many of the state’s craft brewers would prefer to use locally-grown hops for their pilsners, ales and stouts, but a new species of fungus is threatening that prospect.

Working with hop growers in the Lower Peninsula, researchers from Michigan State University, MSU Extension and MSU Plant and Pest Diagnostics have identified a new pathogen that infects hop leaves and cones, the aromatic flowers used in brewing. According to the Spartan team’s Aug. 25 publication in the journal Plant Disease, growers have estimated losing between about 20% and 50% of their yield to the fungus.

The good news is that MSU team members are already working on strategies to manage what they’re calling halo blight, the disease caused by the fungus. There also shouldn’t be a hop shortage while they develop those strategies. Although Michigan is the nation’s fourth largest producer of hops, the Pacific Northwest grows the lion’s share of the crop.

“This isn’t going to threaten our supply of hops, but it hurts our ability to supply locally grown Michigan hops,” said Timothy Miles, an extension specialist and an assistant professor in the Department of Plant, Soil and Microbial Sciences. “In Michigan, we are proud of our craft beer industry and I think we’d like to get all of our hops in Michigan if we could,” Miles said.

The work to identify this new disease began in the summer of 2018. Michigan hop growers noticed that some of their plants, famous for bestowing beer’s bitter flavor, were looking ill. The leaves, normally a solid green, were dotted with brown splotches. Halo blight on a leaf. Courtesy of Doug Higgins.

The growers sent a sample to MSU plant pathologist Jan Byrne at MSU Plant and Pest Diagnostics, who examined the lesions with her microscope and saw something that didn’t belong.

“I knew it was something new, something I hadn’t seen on hops before,” she said. Then she received another sample from another hopyard. “We knew this was more than a one-time thing,” Byrne said.

Based on what she saw, she knew growers were facing a fungus and that she would need help to make a complete ID. So she contacted one of MSU’s foremost authorities in this area, Mary Hausbeck, herself an extension specialist and a University Distinguished Professor in the Department of Plant, Soil and Microbial Sciences. Hausbeck, in turn, brought in Miles and her Ph.D. student Doug Higgins to crack the case.

Higgins got to work, extracting DNA from the fungus, examining the genes and comparing those to known hop pathogens, similar to running fingerprints through an FBI database to identify crime suspects. Higgins found the culprit had several close associates, but no exact matches, confirming that it was a new species. For now, the scientific name for the fungus stands as Diaporthe sp. 1-MI.

The next step was to figure out how widespread halo blight is and how many growers were encountering it. Higgins and Ross Hatlen, a Ph.D. student in Miles’ program, collected hundreds of leaf and cone samples from more than a dozen commercial hopyards across the Lower Peninsula, and from MSU’s Plant Pathology Farm.

They found the fungus is thriving statewide. It accounted for nearly 40% of all the fungal samples the team collected. The researchers also suspect that hop blight is showing up throughout the Great Lakes region and other locations with wetter, more humid climates than the growing regions out West.

The team’s work can thus help prepare plant pathologists in those regions, as well as growers at home. Now that the researchers have identified the cause of halo blight, they can start investigating questions about how to fight it, said Higgins, the first author of the study.

“Now there are all sorts of questions that are relevant to management. How does it get around? Where does it come from?” he said. “Now we can be more targeted in how we answer those using what we’ve learned.” 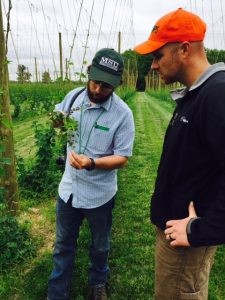 While the Spartan team starts investigating those questions, it’s also studying whether fungicides already approved for use in hopyards are effective against this new intruder. The team is optimistic it could have information to share with growers over the next few years.

Having this opportunity to work directly with specialty crop growers is exactly what drew Higgins to MSU for graduate school. Working with MSU Extension, he’s had a chance to find solutions that can take root in real fields.

“That interaction between the researcher and the grower is priceless. It really drives a lot of research questions,” he said. “It makes them meaningful and impactful.”

Higgins, who will be defending his Ph.D. thesis in November, hopes this work encourages growers to be on the lookout for halo blight and to connect with MSU to work on management strategies.

He also had a message for Michigan’s craft beer brewers and enthusiasts who might be concerned to learn about this new fungus. “I would say don’t worry. We’re working on it.”