Michigan State University’s Wen Li and Erin Purcell are leading the effort to use innovative diamond devices to monitor the brain’s biochemistry for early warning signs of disease. The National Institutes of Health and an MSU Strategic Partnership Grant are funding the work, which includes preclinical testing of the devices in rodents. Using these animal models, the team will evaluate the safety, durability and performance of diamond-based electrodes implanted for up to six months in brain tissue. 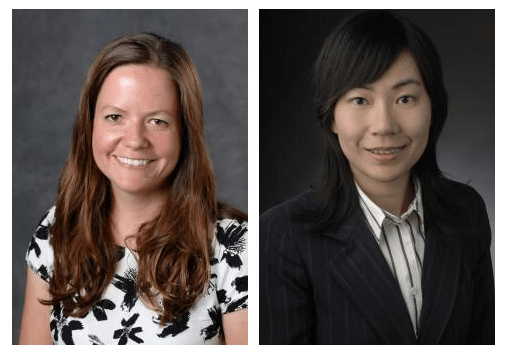 During that time, researchers will essentially have a live feed to the brain’s levels of dopamine, a chemical that neurons use to communicate. Patients with Parkinson’s disease start losing dopamine even before the onset of physical symptoms, such as tremors or balance problems.

“By the time patients with Parkinson’s disease start noticing problems with their motor systems, they may have already lost 60 to 70 percent of their normal dopamine levels,” said Purcell, an associate professor in MSU’s Department of Biomedical Engineering and Department of Electrical and Computer Engineering. “This is an untapped window of opportunity. If you can detect that loss earlier, you open up opportunities to treat the disease earlier.”

Although Parkinson’s disease is the researchers’ primary focus, they added that the diamond devices could probe chemistries involved with other diseases and disorders, such as addiction, depression and Alzheimer’s disease.

“This type of system would revolutionize the community,” wrote one reviewer of the team’s now-approved $3 million NIH proposal. The same reviewer also commented on the strength of the team’s collaborative approach, stating that the “team assembled is well qualified to conduct the proposed work.”

That collaboration starts with Li and Purcell, who have been working together for years. Both belong to MSU’s Institute for Quantitative Health Science and Engineering.

“Our areas of expertise are complementary,” said Li, an associate professor in the Department of Electrical and Computer Engineering. Li’s research focuses on making new devices. Purcell’s team has the skills to apply those devices to biological problems.

For example, Li’s group created the world’s first microscopic fibers made entirely from diamond and, working with Purcell’s team, showed that these fibers can sense the brain’s biochemicals.

Now, the grants will grow the collaboration. The NIH grant features Kip Ludwig from the University of Wisconsin, along with Collin McKinney and Matthew Verber of the University of North Carolina at Chapel Hill, as co-investigators.

Hailing from MSU’s Grand Rapids Research Center, Caryl Sortwell, a professor in the Department of Translational Neuroscience, joined the team as a co-investigator on the roughly $400,000 Strategic Partnership Grant. Sortwell is an expert in developing rodent models for Parkinson’s disease studies and using those models to research ways to slow Parkinson’s progression.

Both grants will connect the team with resources and experts at the Fraunhofer USA Center for Coatings and Diamond Technologies at MSU, including Executive Director John Albrecht and Director of Operations Michael Becker. “We are excited to be part of this multidisciplinary MSU-led team and look forward to supplying and further enhancing the core diamond technology for advanced medical research applications,” Becker said.

Working with Fraunhofer USA will help the team bolster its diamond-based approach, which both reviewers and researchers emphasized as another strength of the research proposals. 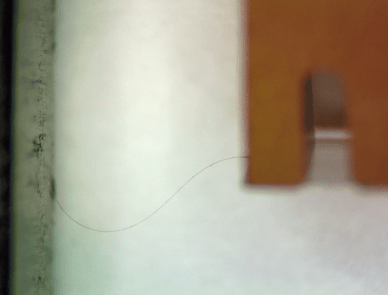 A diamond fiber looks like a wavy strand of hair in this photo, showing off the flexibility that comes with its small size. Courtesy of Wen Li.

“Diamond is a very unique material,” said Li, calling out its durability. “That has the potential to improve the stability of our devices.”

Other electrode materials can degrade or decompose over time when implanted in living tissue, but diamond should be tough enough to survive months of implantation, Li said.

But toughness can also be a drawback in biology. Implants need to be compliant, or flexible, so they don’t irritate or damage soft tissue.

“Flexibility is tricky,” Li said. Her team has a solution, though. They develop techniques to make ever shrinking diamond devices, which will continue under the new grants. “When the dimensions shrink, the device becomes more compliant,” Li said.

“As it shrinks, the device becomes unseen to the tissue,” Purcell added. “You can think of it as a sort of stealthy sensor inside the brain.”

If the researchers are successful, then, they will have built an unseen sensor to spot previously undetected signs of Parkinson’s disease early in its onset. Although the team is optimistic, the researchers aren’t taking success for granted. There will be hurdles when it comes to sensing low levels of dopamine in real, living brain tissue teaming with other chemicals. But the team is prepared for that.

“There are a lot of challenges,” Purcell said. “We have to see if diamond can overcome those.”