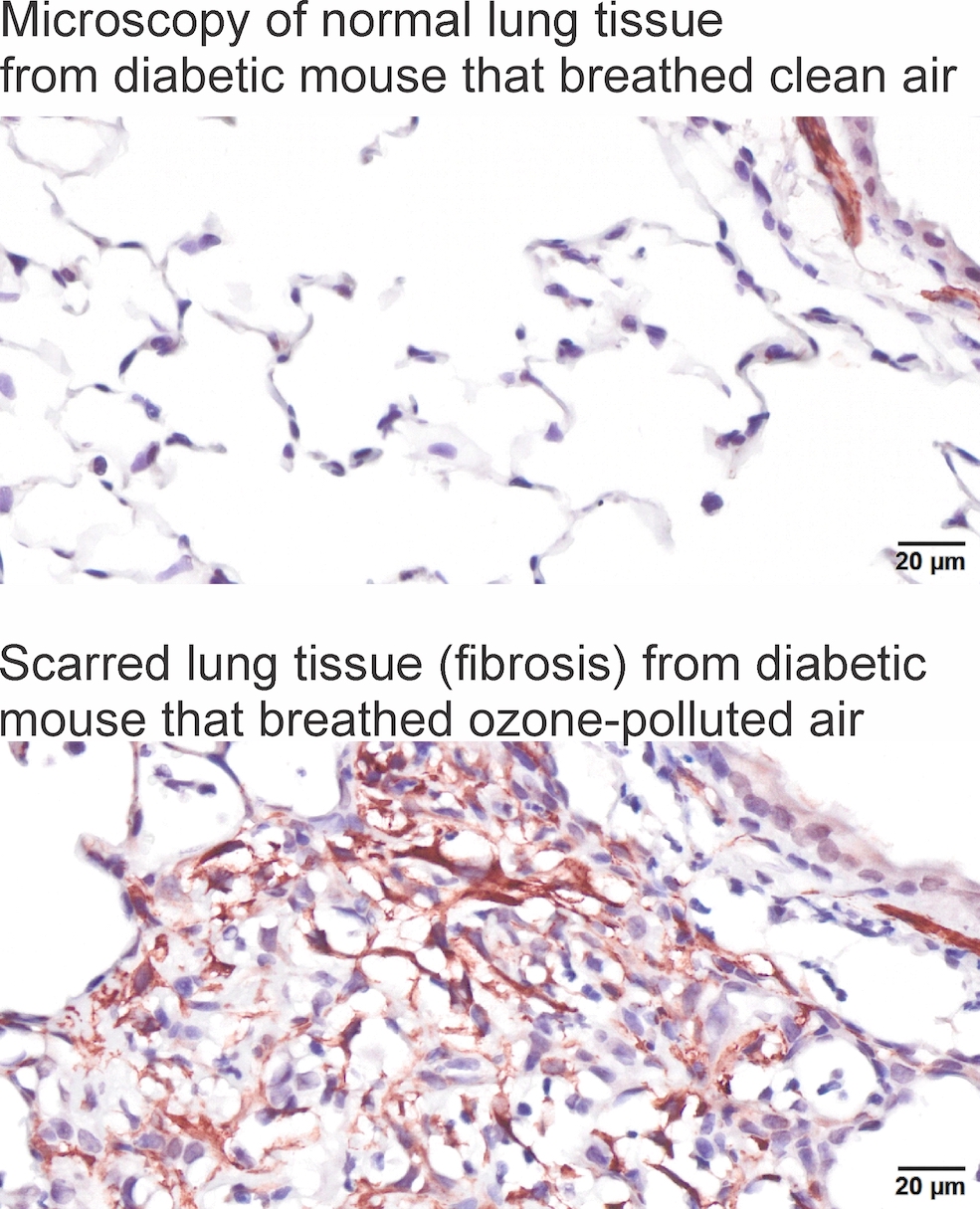 People with prediabetes or diabetes who live in ozone-polluted areas may have an increased risk for an irreversible disease with a high mortality rate. A new study recently published in the Environmental Health Perspectives connects insulin resistance and repetitive ozone exposure to the development of interstitial lung disease.

“Our findings are especially important today as we’re in the midst of the COVID-19 pandemic, where we have great concern regarding the convergence of health effects from air pollution and SARS-CoV-2 in susceptible populations like people with diabetes,” said James Wagner, lead author and associate professor for the MSU College of Veterinary Medicine’s Department of Pathobiology and Diagnostic Investigation.

Ozone – a gas often referred to as “smog” – is known to intensify certain lung diseases, such as asthma and rhinitis, which are primarily upper airway diseases. But recent epidemiology suggests an association between high ozone concentrations and adverse health effects in the deep lung, which cause difficulty breathing due to lung restriction and stiffness.

“Evidence suggests that ozone exposure could exacerbate pulmonary fibrosis, particularly in individuals that are diabetic,” said Tighe, a pulmonologist who specializes in interstitial disease at Duke. “Poorly controlled diabetes, in particular, may be an important co-morbidity for worsened lung damage.”

According to Wagner, these findings are of critical importance for public health.

“Our results propose a causal link for ozone exposure to preferentially promote early pulmonary fibrosis and lung disease in prediabetic mice. We only exposed these mice for three weeks, but there are millions of people living in cities like Los Angeles and New York who are exposed to high levels of ozone day after day,” he said. “Then, you must consider the prevalence of prediabetes people — approximately 33% in this country. Our study results suggest that people who are borderline insulin resistant — or diabetic — and living in areas with high levels of ozone pollution might be at an increased risk for developing lung disease.”

This study is just the latest in Wagner and Harkema’s research efforts, which describe pre-diabetes as a risk factor for multiple possible adverse responses to air pollution. Wagner has previously shown deleterious effects on heart rate, blood pressure and adipose tissue inflammation in prediabetic rodents that were exposed to ozone.

The authors believe this study is the first of its kind, as it describes aggravated pulmonary inflammation and remodeling due to repetitive, short-term ozone exposures in insulin-resistant rodents that also exhibit other manifestations of Type 2 diabetes. The work was supported in large part by the researchers’ grant from the Environmental Protection Agency’s Great Lakes Air Center for Integrative Environmental Research at MSU.

(Note for media: please include a link to the original paper in online coverage: “Repetitive Ozone Exposures and Evaluation of Pulmonary Inflammation and Remodeling in Diabetic Mouse Strains” — https://ehp.niehs.nih.gov/doi/10.1289/EHP7255)