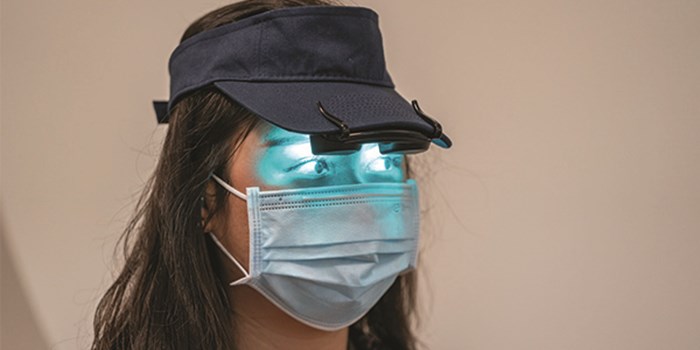 COVID-19 might have paused a lot of research on campus, but one researcher from the Michigan State University College of Nursing has been given the green light to continue her study.

Associate Professor Horng-Shiuann Wu received clearance from the university and an extension from the National Institutes of Health to enroll additional female breast cancer patients in her work examining the effect of light therapy on fatigue, poor sleep, cognitive dysfunction and depression.

“Cancer survivors can still experience a lot of symptoms,” Wu said. “A lot of people think once their hair is back, that they should be back to normal, but a lot of them still suffer silently.   “You don’t even know the amount of breast cancer survivors that I have talked to over the phone who have broken down because they’ve  never been able to talk about this with somebody.”

Typically, Wu said, cancer disrupts the body’s circadian rhythm — or internal clock — leading to sleep issues. Her early findings have shown improved sleep outcomes in those who wear a special visor that projects blue-green light onto their eyes for 30 minutes a day, for two weeks. The light therapy is intense — about 40 times the brightness of an overhead light in an office — but Wu said patients report feeling calmer, sleeping better and feeling more energetic after the therapy.

The idea, she notes, is that the exposure to the bright light resets the body’s internal clock, in a way similar to how the sun functions for the average person. Once the internal clock is recalibrated, then, the cancer patients can resume sleeping better.

Participants in the study, which is set to end in August 2021, receive a tailored treatment approach, depending on whether they are a night owl or an early bird.

Wu hopes to expand her study to also include male cancer survivors with solid tumors to see how they will respond to a very similar light therapy treatment; she has already submitted a funding request and will likely know more later this year, possibly as soon as November.

She notes circadian rhythm research has especially been a hot topic in recent years after researchers from Brandeis University and Rockefeller University in New York won the Nobel Prize in Physiology or Medicine in 2017 for their work on molecular mechanisms and circadian rhythm.

Wu said she sees the appeal of why researchers would want to learn more about how our an individual’s internal clock functions.

“I think this is an easy and simple way to help survivors,” Wu said of her light therapy research. “It gives them some non-pharmacological options.”

This story was originally featured on the College of Nursing website.

Untangling the complicated relationship of health, economy during COVID-19 restrictions