Why abusive husbands kick dogs but angry neighbors poison them 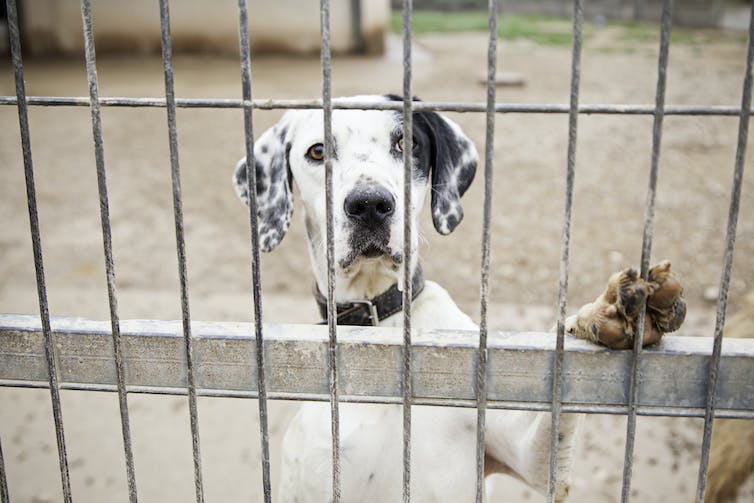 Laura Reese, professor of political science and director of Global Urban Studies Program, Michigan State University, wrote this piece for The Conversation, an independent collaboration between editors and academics that provides informed news analysis and commentary to the general public. See the entire list of articles written by MSU faculty for The Conversation.

Volunteering with animal rescue and shelter organizations in Detroit brought me face to face with many manifestations of animal cruelty: dogs left outside and frozen in their yards; dogs with chain link collars embedded in their necks; cats that had gaping wounds full of maggots as the result of being doused with acid; and dogs used for dog fighting.

I never forgot these sights. They led me, an urban studies researcher, to question the potential causes of animal cruelty and what might be done about it from a public policy standpoint.

To explore this, I examined animal cruelty in the city of Detroit. My research shows that animal cruelty is tightly connected to human relationships, but in complex ways.

That suggests that governments need different policies targeted to specific forms of cruelty and the types of human relationships behind them. Counter to the one-size-fits-all laws and punishments that restrict particular breeds of dogs or prohibit animals in domestic violence shelters, efforts to reduce animal cruelty must be flexible and multi-pronged.

Animal welfare in Detroit is exacerbated by several interconnected factors, including economic distress, home vacancy and a high crime rate.

In 2008, bite-related emergency room visits in the Detroit area were almost four times the rates for urban areas nationwide. Estimates of stray and feral dogs in Detroit range from 3,000 to 50,000, putting extreme pressure on animal welfare resources.

I looked at all 302 animal cruelty police reports between 2007 and 2015. Some of the most frequent types of animal cruelty in Detroit were shooting, kicking and blunt force trauma, neglect and dog fighting.

These patterns differ from those in other cities, where neglect – meaning the restriction of movement, lack of food, water and veterinary care – and abandonment are the most common forms of cruelty.

Owners perpetrated one out of five cruelty incidents. Neighbors and domestic or other intimate partners were the next most likely to inflict harm, followed by family members, a person the owner had a conflict with and a stranger.

My statistical analysis suggests that the younger an adult is, the more likely they are to engage in dog fighting. Gender and race are not significantly correlated with any of the types of cruelty.

My findings suggest how policymakers could try to reduce various types of animal cruelty. The specific step that a policymaker might take depends on the type of cruelty.

For example, dog fighting is closely tied to other criminal acts, primarily drug use, and involves dogs that are owned by the perpetrator. Interpersonal relationships do not need to be considered in the prevention of such cruelty. Rather, animal cruelty experts recommend police crackdowns on fighting and breeding operations, as well as general drug and weapons possession and sales, to combat this type of animal cruelty.

Passive animal cruelty in the form of neglect is most commonly perpetrated by the animals’ owners. Neglect is likely related to lack of knowledge about appropriate animal care and potentially to a lack of resources. School education programs have been found to increase kids’ and parents’ general knowledge about the needs of animals. There are a variety of nonprofit organizations that provide low-cost food, medications and spay and neutering services to the city’s animals.

Increased enforcement of city ordinances regulating barking dogs and dogs off leash could decrease the kinds of animal nuisance behaviors that appear to lead neighbors to poison animals.

But what about other forms of cruelty, such as stabbing, kicking and blunt force injuries? These appear linked to the same aggression that also motivates assault, domestic violence, and intimidation and harassment.

Between 47% and 71% of women in domestic violence shelters report that their partners abused or threatened their pets. This threat also serves to keep women in abusive relationships; 40% of women said that they delayed leaving an abuser out of concern for the safety of their pets.

To reduce the risks to animal companions, it seems critical for the person who’s being abused to leave their abusive relationship and get their animals to safety at the same time. A variety of animal shelters have begun programs where the pets of abuse victims can stay temporarily. Domestic violence shelters are also beginning to include facilities that allow families to bring their pets with them.

These policies show how some groups are starting to recognize the meaningful and complex role that human relationships play in animal cruelty.