Soobin Kim, MSU researcher, wrote this piece for The Conversation, an independent collaboration between editors and academics that provides informed news analysis and commentary to the general public. See the entire list of articles written by MSU faculty for The Conversation. 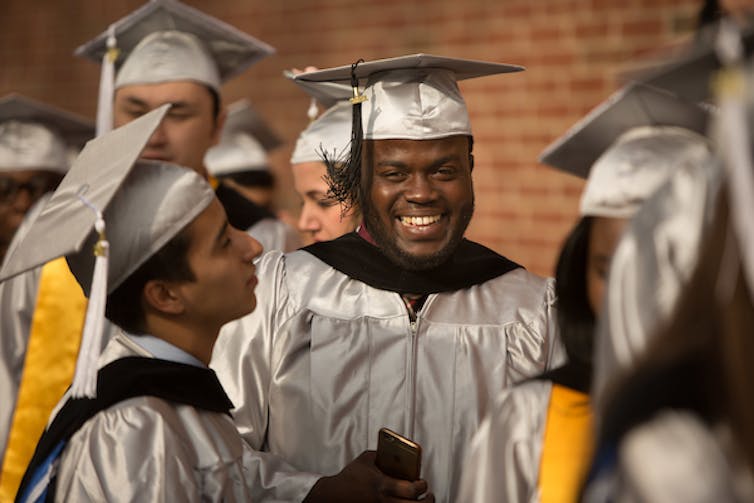 When it comes to career success, it pays to aim for more education than what you need for the job you want.

Prior research had already shown that high school students who have a profession in mind and know what sort of education they need for that profession – what is sometimes referred to as “aligned ambitions” – secured more stable careers and higher wages early in their careers.

As a researcher who studies the impact college enrollment has on future earnings, I’ve discovered an additional payoff when students have what we might call “over-aligned” ambitions – that is to say, they expect to get more education than what they need for their desired career.

For example, suppose a student aspired to become a police officer or a banker. At the time the students in our study were in high school – 1979 – those careers required only a high school diploma, which is still pretty much the case today. However, students who planned on those careers and planned to go to a four-year college ended up making substantially more money per year than others who aspired to the same occupation but did not plan as much education.

To reach this conclusion, we used data from a national sample. Starting in 1979, the survey asked young people how much education they expected to finish and what career they aspired to have at age 30, then followed them into their careers over the next few decades.

What we discovered is that students whose educational goals were too low in relation to their career goals earned the least. By age 33 to 45, those whose education goals were well aligned with their career goals earned 4% more than this first group. But students who were overly ambitious – planning to take on studies that weren’t required by the jobs they wanted – actually did best, earning 11% more than the least educationally minded peers. This is based on an index used to measure wages and occupational prestige.

These benefits extend through a person’s mid-40s.

These findings show the importance of high school students having information about how much education is necessary for certain careers, as well as aiming for more education than is necessary.

In addition, as the education requirements of the workplace have risen, students are more in danger of finding themselves lacking the necessary skills and credentials for the careers they want. Students who complete more education than is needed still get the skills they need, while leaving themselves open to more lucrative and prestigious career options.

Students can get job information from parents or other relatives. Or it could come from school counselors and teachers. School counselors, however, are often stretched thin and have more responsibilities than just helping students figure out their education and career options.

Students should also have access to the high school coursework they need to pursue the college major they choose. However, students in schools that serve high proportions of minority students sometimes lack access or aren’t counseled, encouraged or prepared to enroll in STEM or advanced math coursework, which is likely to increase a student’s chances of going to college. Even when schools do offer a wide array of courses, minority students are often placed in lower-track courses.

This is especially problematic because we found that minority students reap some of the largest benefits from having high educational and career ambitions. For example, we found that Hispanic students saw 13% higher wages when they expected to obtain more education than needed for their desired career.

Planning coursework is a process that schools and parents should start early. This is because the courses students take in middle school and early high school can determine if they are able to get into higher-level and more specialized classes. For instance, research has shown that taking more advanced math and science increases the likelihood of going to college. It also leads to higher wage earnings.

Finally, mindset programs can help students envision their futures and persist through setbacks. This is important so that students who have higher expectations for education can actually realize them.

Getting students to want more education is not just something that will make them better educated. My research shows that it will lead them to earn more money as well.

College of Education
Ask the Expert: Online learning vs. classroom learningJun 04, 2020Online learning can be as good or even better than in-person classroom. . .Tending to young children’s mental healthJun 03, 2020COVID-19 has created a lack of stability in our everyday lives. Families. . .Helping Michigan families stay home with free, online parenting video seriesMay 18, 2020MSU researchers partered with the Michigan Parent Management Training. . .Free program supports educators in remote teachingMay 07, 2020As PreK-12 and higher education schools shift to remote teaching in. . .Alton Kirksey: A path to athletic successMay 06, 2020Alton B. Kirksey’s goal was to graduate in four years. During. . .

Study: How to identify patients most at risk from COVID-19 through nanotechnologyMay 18, 2020What if doctors could not only diagnose a COVID-19 infection but. . .
$6.1M gift honors late sociologist and anthropologist alumnusMay 29, 2020The MSU Libraries has received a $6.1 million gift from research. . .
Ask the Expert: Online learning vs. classroom learningJun 04, 2020Online learning can be as good or even better than in-person classroom. . .
More African American and Hispanic children die from cancer than white children Jun 04, 2020African American and Hispanic children admitted to pediatric intensive. . .
Ask the Expert: COVID-19 testingJun 03, 2020We do need community wide testing of asymptomatic people before we can. . .

Michigan State University was recently named the No. 1 college and university dining program in the nation.