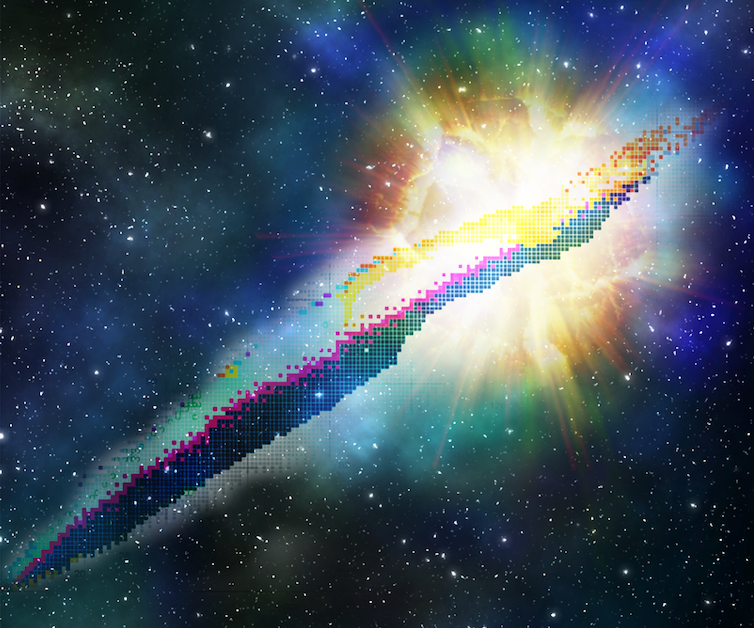 Nearly 70 years ago, astronomer Paul Merrill was watching the sky through a telescope at Mount Wilson Observatory in Pasadena, California. As he observed the light coming from a distant star, he saw signatures of the element technetium.

This was completely unexpected. Technetium has no stable forms – it’s what physicists call an “artificial” element. As Merrill himself put it with a bit of understatement, “It is surprising to find an unstable element in the stars.” 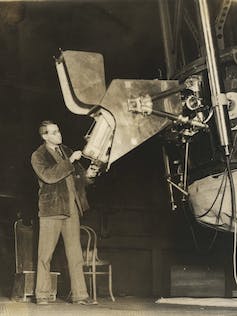 Paul W. Merrill standing at the spectrograph mounted on the 60-inch telescope at Mount Wilson Observatory. Observatories of the Carnegie Institution for Science Collection at the Huntington Library, San Marino, California

Any technetium present when the star formed should have transformed itself into a different element, such as ruthenium or molybdenum, a very long time ago. As an artificial element, someone must have recently created the technetium Merrill spotted. But who or what could have done that in this star?

On May 2, 1952, Merrill reported his discovery in the journal Science. Among the three interpretations offered by Merrill was the answer: Stars create heavy elements! Not only had Merrill explained a puzzling observation, he had also opened the door to understand our cosmic origins. Not many discoveries in science completely change our view of the world – but this one did. The newly revealed picture of the universe was simply mind-blowing, and the repercussions of this discovery are still driving nuclear science research today. 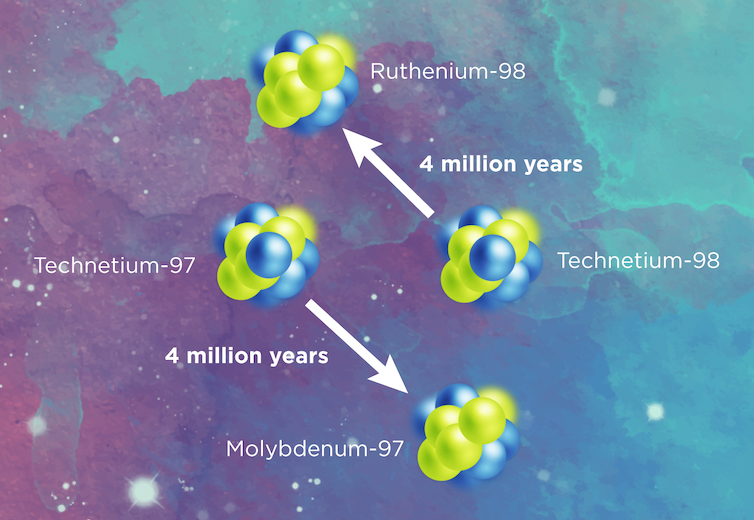 Technetium nuclei are transformed into Ruthenium or Molybdenum within a few million years – so if you spot them now, they can’t be left from the Big Bang billions of years ago. Erin O’Donnell, Michigan State University, CC BY-ND

Where do elements come from?

In the early 1950s, it was still unclear how the elements that make up our universe, our solar system, even our human bodies, were created. Initially, the most popular scenario was that they were all made in the Big Bang.

First alternative scenarios were developed by renowned scientists of the time, like Hans Bethe (Nobel Prize in Physics, 1967), Carl Friedrich von Weizsäcker (Max-Plank Medal, 1957), and Fred Hoyle (Royal Medal, 1974). But no one really had come up with a convincing theory for the origin of the elements – until Paul Merrill’s observation.

Merrill’s discovery marked the birth of a completely new field: stellar nucleosynthesis. It’s the study of how the elements, or more accurately their atomic nuclei, are synthesized in stars. It didn’t take long for scientists to start trying to figure out exactly what the process of element synthesis in stars entailed. This is where nuclear physics had to come into play, to help explain Merrill’s amazing observation.

Fusing nuclei in the heart of a star

Brick by brick, element by element, nuclear processes in stars take the abundant hydrogen atoms and build heavier elements, from helium and carbon all the way to technetium and beyond.

Four prominent nuclear (astro)physicists of the time worked together, and in 1957 published the “Synthesis of the Elements in Stars”: Margaret Burbidge (Albert Einstein World Award of Science, 1988), Geoffrey Burbidge (Bruce Medal, 1999), William Fowler (Nobel Prize in Physics, 1983), and Fred Hoyle (Royal Medal, 1974). The publication, known as B2FH, still remains a reference for describing astrophysical processes in stars. Al Cameron (Hans Bethe Prize, 2006) in the same year independently arrived at the same theory in his paper “Nuclear Reactions in Stars and Nucleogenesis.”

Here’s the story they put together.

Stars are heavy. You’d think they would completely collapse in upon themselves because of their own gravity – but they don’t. What prevents this collapse is nuclear fusion reactions happening at the star’s center. 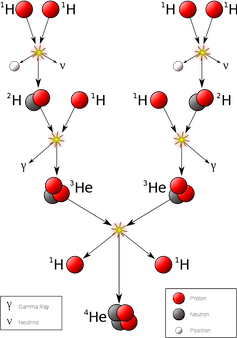 Within a star are billions and billions of atoms. They’re zooming all around, sometimes colliding with one another. Initially the star is too cold, and when atoms’ nuclei collide they simply bounce off each other. As the star compresses because of its gravity, though, the temperature at its center increases. In such hot conditions, now when nuclei run into each other they have enough energy to merge together. This is what physicists call a nuclear fusion reaction. 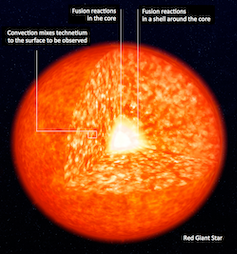 Fusion reactions happen in different parts of a star. Technetium is created in the shell. ESO, CC BY-ND

First, they release energy that heats the star, providing the outward pressure that prevents its gravitational collapse and keeps the star in balance for billions of years. Second, they fuse light elements into heavier ones. And slowly, starting with hydrogen and helium, stars will make the technetium that Merrill observed, the calcium in our bones and the gold in our jewelry.

Many different nuclear reactions are responsible for making all this happen. And they’re extremely difficult to study in the laboratory because nuclei are hard to fuse. That’s why, for more than six decades, nuclear physicists have continued to work to get a handle on the nuclear reactions that drive the stars.

Today there are many more ways to observe the signatures of element creation throughout the universe.

Very old stars record the composition of the universe way back at the time of their formation. As more and more stars of varying ages are found, their compositions begin to tell the story of element synthesis in our galaxy, from its formation shortly after the Big Bang to today.

And the more researchers learn, the more complex the picture gets. In the last decade, observations provided evidence for a much broader range of element-creating processes than anticipated. For some of these processes, we do not even know yet in what kind of stars or stellar explosions they occur. But astrophysicists think all these stellar events have contributed their characteristic mix of elements into the swirling dust cloud that ultimately became our solar system.

The most recent example comes from a neutron-star merger event tracked by gravitational and electromagnetic observatories around the world. This observation demonstrates that even merging neutron stars make a large contribution to the production of heavy elements in the universe – in this case the so-called Lanthanides that include elements such as Terbium, Neodynium and the Dysprosium used in cellphones. And just like at the time of Merrill’s discovery, nuclear scientists around the world are scrambling, working overtime at their accelerators, to figure out what nuclear reactions could possibly explain all these new observations. 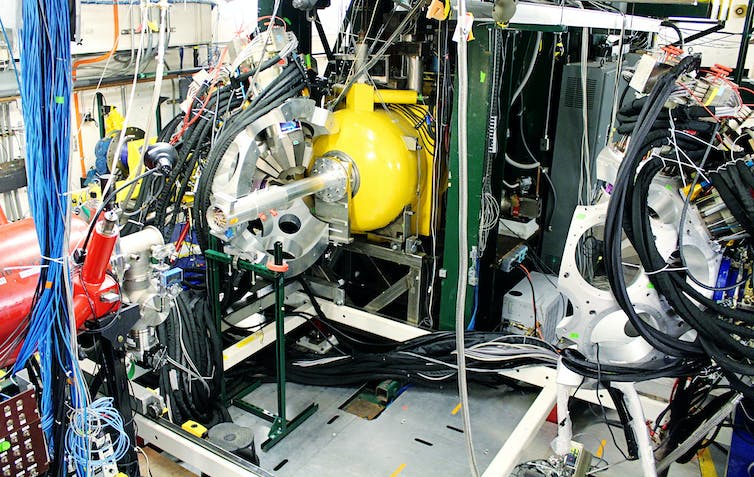 Modern nucleosynthesis experiments, like those of the authors, are run on nuclear physics equipment including particle accelerators. National Superconducting Cyclotron Laboratory, CC BY-ND

Discoveries that change our view of the world don’t happen every day. But when they do, they can provide more questions than answers. It takes a lot of additional work to find all the pieces of the new scientific jigsaw puzzle, put them together step by step and eventually arrive at a new understanding. Advanced astronomical observations with modern telescopes continue to reveal more and more secrets hidden in distant stars. State-of-the-art accelerator facilities study the nuclear reactions that create elements in stars. And sophisticated computer models put it all together, trying to recreate the parts of the universe we see, while reaching out toward the ones that are still hiding until the next major discovery.