Robert Montgomery, assistant professor in Michigan State University's Department of Fisheries and Wildlife, and Arthur Muneza, doctoral candidate at MSU, wrote this piece for The Conversation, an independent collaboration between editors and academics that provides informed news analysis and commentary to the general public. See the entire list  of articles written by MSU faculty for The Conversation.

Two years ago, the conservation status of giraffes was downgraded from “least concern” to “vulnerable” after it was discovered that the species had declined by 40 percent over the past 30 years. 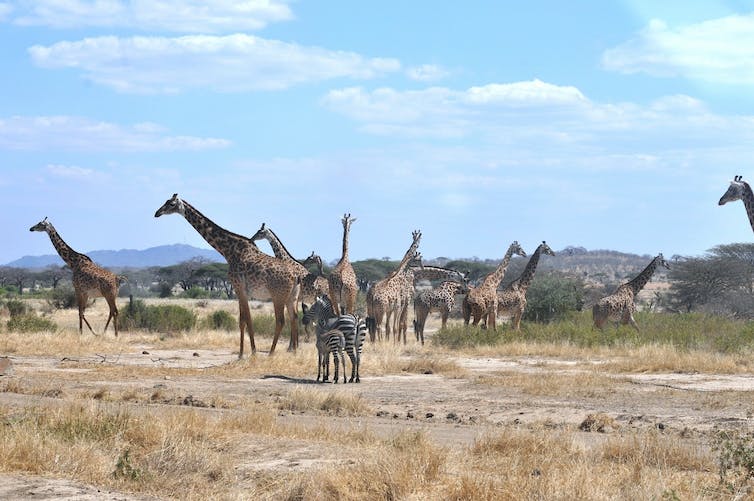 Protecting them has become a priority. This is particularly true in East Africa which is home to an estimated 55.2 percent of the remaining 100,000 giraffes living in the wild in Africa. They are mostly concentrated in Kenya, Tanzania, and Uganda.

Our research identified another threat, a disease generically referred to as Giraffe Skin Disease. The disease is characterised by large greyish-brown lesions that form on various parts of a giraffe’s body. We conducted our research in 2014 and by 2015 Giraffe Skin Disease was recorded in seven African countries – Kenya, Uganda, Tanzania, Namibia, Botswana, Zimbabwe and South Africa. The disease is most prevalent in East Africa, where it affects 86 percent of the giraffes in Ruaha National Park, Tanzania.

The disease can break out in different parts of a giraffe’s body depending where they’re located. For example, in Tanzania giraffes’ legs are affected while in Uganda it tends to be the neck and shoulders.

We were unable to establish whether the disease was fatal. But we concluded that it’s possible giraffes are made more vulnerable to predators if they have lesions that make fleeing a predator difficult.

Our research revealed that skin disease is more widespread than initially thought and more conservation research is required. The disease was first described in Uganda in 1994 and in Tanzania in 2000. Yet it’s only recently that researchers have started to study it in detail.

Giraffes face unprecedented risks as the region experiences some of the fastest human population growth rates in the world. One of consequences is likely to be subsistence hunting. According to conservation organisations in southern Kenya, if a poacher manages to sell meat as well as parts from a single giraffe, the return can fetch a minimum of $1,000. This is enough to purchase a motorbike.

In northern Tanzania, giraffe parts are used in traditional medicine. And giraffe bone marrow and brains are incorrectly believed to cure AIDS.

Poison arrows, spears, and rifles are used to kill giraffes. However, the most common tools used are wire snares attached to trees. These typically capture giraffes around their necks or legs. In areas such as Murchison Falls National Park, Uganda, giraffes aren’t necessarily the intended target when caught in snares. The traps are set to capture smaller antelope for food but can trap giraffes. The injuries they sustain can be fatal.

Giraffe skin disease is reportedly caused by a parasitic worm – the specific species of the worm has not been identified. The severity of the lesions is further complicated by secondary fungal infections. While the severe form of the disease restricts the movement of giraffes, very few studies have examined the exact cause of the disease and its physiological effects. In addition, it is still unclear whether the disease leads to mortality.

As humans and wildlife become more interactive with increasing encroachment of wildlife habitats, there should be a bigger focus on wildlife diseases. Understanding the effects of these skin disease lesions will undoubtedly help advance giraffe conservation as the role of diseases in the decline of giraffe populations across Africa is still unclear.

For a long time, conservation issues have been addressed from an ecological perspective, not taking into account the human dimensions of conservation. To this end, the socio-economic and cultural importance of giraffes remains poorly understood and documented.

One of our projects, the Snares to Wares Initiative, seeks to address this. The initiative reuses the raw wire from snares set in Murchison Falls National Park to create wire art, which is sold around the world. This addresses a conservation and human livelihood issue by providing benefits and an alternative source of income to young locals. The initiative also trains students through the Research on the Ecology of Carnivores and their Prey Laboratory.

Knowledge gaps and lack of incentives for wildlife conservation deter local communities from contributing towards preservation of wildlife and wild spaces. The lab’s approach is to recruit students from different backgrounds working collaboratively to address conservation issues. The students gain skills in socio-economics and wildlife ecology and drive conservation efforts from the East African region and beyond.

College of Agriculture and Natural Resources

Fisheries and Wildlife
Michigan State University women making a difference in global healthFeb 11, 2020MSU's Department of Biosystems and Agricultural Engineering is expanding. . .MSU honors global SpartansFeb 07, 2020MSU International Studies and Programs has named the recipients of this. . .Thinking beyond the box: MSU a leader in packaging scienceFeb 05, 2020When it comes to finding solutions for a better tomorrow, Spartans have. . .The birds and the trees: Scientists use remote sensing data to help explain patterns of lifeFeb 03, 2020Satellite remote sensing technology is giving MSU researchers a powerful. . .MSU receives $1.2M NSF grant to study intelligent social network interventionsJan 31, 2020The objective of this $1.2M research project is to create a model to. . .
Long-term mapping key to effective management of irrigated areasJan 27, 2020According to experts, maintaining and even expanding irrigation is. . .Scientists improve yield predictions based on seedling dataJan 08, 2020Using plant RNA data from 2-week-old corn seedlings, an MSU researcher. . .Conservation’s hidden costs take bite out of benefitsDec 20, 2019Returning croplands to forests is a sustainability gold standard to. . .Identifying a plant cell barrier to breeding more nutritious cropsDec 20, 2019What if we could grow plants that are larger and also have higher. . .Sleet or snow, MSU farm managers care for campus animalsDec 16, 2019While many university employees enjoy time off during the holidays,. . .
MSU veterinarians partner with Potter Park Zoo to deliver baby black rhinoOct 10, 2019For the first time, there is a pregnant black rhinoceros at. . .Wildlife trafficking and more hinder nations’ sustainable developmentAug 12, 2019Transnational environmental crime – wildlife trafficking, illegal. . .Restocking wolves on Isle Royale raises questions about which species get rescuedOct 15, 2018As published in The Conversation, MSU faculty Eric Freedman. . .Richard Tanner: Raising awareness through artJun 13, 2018Richard Tanner was a senior studio art major when he collaborated with. . .Jen Owen: Birds in the AnthropoceneJul 05, 2017This is the 135th annual meeting of the American Ornithological Society. . .
All global sustainability is localJan 02, 2020In a “Nature” cover story, Jianguo "Jack" Liu and. . .Susan Packard, Doug Meijer to speak at MSU commencementNov 25, 2019The co-founder of HGTV and the co-chairperson of Meijer will speak at. . .New research shows inland fisheries as rural nutrition heroOct 02, 2019Synthesizing new data and assessment methods is showing how freshwater. . .Wildlife trafficking and more hinder nations’ sustainable developmentAug 12, 2019Transnational environmental crime – wildlife trafficking, illegal. . .Smells like love … to sea lampreysJul 09, 2019In new research led by MSU and published in the current issue of PLoS. . .

Thinking beyond the box: MSU a leader in packaging scienceFeb 05, 2020When it comes to finding solutions for a better tomorrow, Spartans have. . .
Does a growth mindset matter for success?Feb 13, 2020New research from MSU and Case Western University challenges the claim. . .
The curious case of the disappearing snakesFeb 13, 2020An MSU-led study featured on the cover of this week’s Science. . .
A happy partner leads to a healthier futureFeb 10, 2020MSU research found that those who are optimistic contribute to the. . .
'Breathe Easy: Tobacco and nicotine cessation program' begins Feb. 26Feb 10, 2020"MSU Breathe Easy: Tobacco and Nicotine Cessation Program" is a free. . .

MSU’s new class of Michigan Political Leadership Program Fellows come from communities all over the state and have diverse backgrounds in nonprofits, businesses, public service and law enforcement. The 24 chosen Fellows will meet one weekend each month to train in campaigning, organization, budgeting, skill-building exercises and more.