Arms and influence in the Khashoggi affair 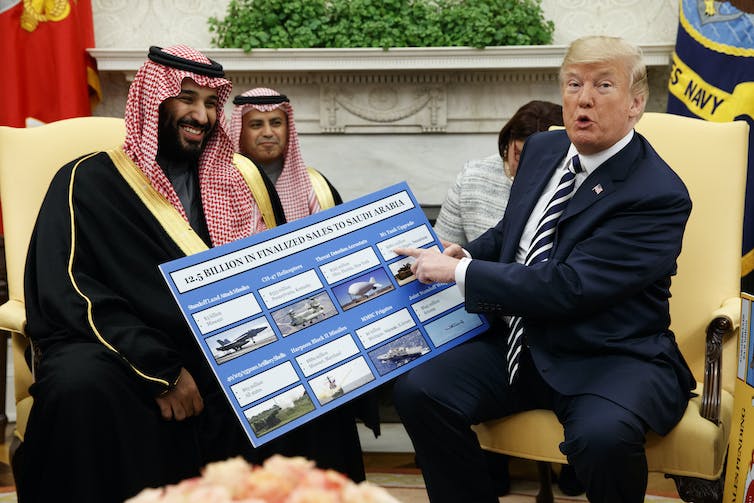 Russell E. Lucas, director of global studies in the arts and humanities and associate professor of international relations, wrote this piece for The Conversation, an independent collaboration between editors and academics that provides informed news analysis and commentary to the general public. See the entire list of articles written by MSU faculty for The Conversation.

President Donald Trump’s reaction to the disappearance and death of Saudi journalist Jamal Khashoggi in Istanbul reveals important details about the declining influence of U.S. in the Middle East.

As a scholar who follows the links between international and domestic politics in the Middle East, it is not hard to see that what President Trump has said so far about the Khashoggi affair will accelerate the diminishing power of the U.S. in the Middle East.

New dynamic for an old alliance

American influence in the Middle East – especially over Saudi Arabia – was already waning before Trump’s election.

After the Bush administration’s failure to turn post-invasion Iraq into a model of pro-American democracy in the Middle East, the Obama administration attempted to avoid Middle East military quagmires.

Instead, it tried to use diplomacy to negotiate with Iran on its nuclear program. But asking the Saudis to share their neighborhood with their Iranian rivals was instead seen by Saudis as asking for Arab acquiescence to Iranian power.

The recent rise of Saudi Crown Prince Mohammad bin Salman pushed Saudi Arabia from a country that preferred to work in the background in international affairs into a nation that stepped up its activity as the U.S. stepped back.

The Saudis took Trump’s election as an opportunity to push the U.S. for a harder line on Iran. They wanted the U.S. to reverse the nuclear deal and do more to block Iran’s clients in Syria, Yemen, Iraq and Bahrain. The Saudis also wanted to arm themselves with more modern weapons systems.

Trump and the art of the arms deal

Trump’s vision of Saudi-U.S. relations has arms sales by the U.S. to Saudi Arabia at its center, which is an example of how his “America First” foreign policy works.

In Trump’s first foreign visit as president, he flew to Saudi Arabia and signed a deal to sell $110 billion worth of arms to the Saudis. Trump emerged from that trip with a close relationship to Crown Prince Salman, who drives much of Saudi government policy for his aged father, King Salman.

Since then, the prince has developed a strong relationship with Trump’s son-in-law, Jared Kushner, who serves as a regular liaison between the U.S. and Saudi Arabia.

Recently, Trump rejected the idea of Congress imposing sanctions on Saudi Arabia if the Saudis were found responsible for killing Khashoggi.

Trump said, “I don’t like stopping massive amounts of money that’s being poured into our country on – I know they’re talking about different kinds of sanctions, but they’re spending $110 billion on military equipment and on things that create jobs, like jobs and others, for this country.”

In another interview, Trump said that he told the king of Saudi Arabia, “King, you’ve gotta pay” for American protection.

Trump’s transactional foreign policy is primarily concerned with money and American jobs. Previous bipartisan cornerstones of U.S. foreign policy have fallen to the wayside, including promoting human rights and democracy or seeking a strategic balance of power favorable to American interests.

This policy risks pushing U.S. influence in the Middle East further to the margins. In Trump’s calculations, the U.S. cannot sanction or chastise Riyadh because it would hurt the U.S. more than it would Saudi Arabia. American jobs would be lost if the Saudis turned to purchasing arms from Russia or China.

While Trump may believe his own accounting of the $110 billion in arms sales, there are questions as to whether the sales are really worth far less. Moreover, some observers have remarked that the U.S. arms sales were trading human rights for profit. In addition to concerns about the lack of freedom within Saudi Arabia, others have worried that these arms will aid what has become a shockingly deadly Saudi intervention in Yemen.

The Saudis have threatened “that if it receives any action, it will respond with greater action, and that the kingdom’s economy has an influential and vital role in the global economy.” The exact nature of these actions remains unclear. These threats, however, play on fears that the Saudis would cancel the arms purchase or raise the price of oil. And late on Monday, reports emerged that Saudi Arabia was going to admit accidentally killing Khashoggi in an interrogation.

President Trump has emboldened Saudi Arabia by relying on his personal diplomacy and focusing on jobs rather than broader American interests or ideals. If the Saudis are able to keep the United States out of the Khashoggi affair, then Trump has opened the door to further limits on U.S. influence in the Middle East.

College of Arts and Letters

James Madison College
Valerie McNamara: Embracing new opportunitiesFeb 05, 2020As I start my second semester here, I have already embraced many new. . .Progress in rolling out of national power grids has stalled across AfricaJan 09, 2020About four in 10 Africans lack an electricity connection in their homes.. . .Spartan photographers honored in international photo contestNov 22, 2019A garden in Japan, elephants in Myanmar and sunset in South Africa are. . .Lower refugee limits are weakening resettlement in the USOct 28, 2019President Donald Trump announced that the U.S. will cut the number of. . .Testing new therapies to treat diseases in postpartum dairy cowsOct 23, 2019Researchers from the College of Veterinary Medicine are partnering with. . .
ATD student gets backstage look at New York Fashion WeekFeb 28, 2020India Johnson, apparel and textile design major, recently got to. . .MSU outreach and engagement awards recognize exceptional university-community collaborationsFeb 26, 2020The annual MSU Outreach and Engagement Awards on February 19 honored. . .MSU Latinx Film Festival brings the heat Feb. 12-16Jan 30, 2020Dreaming of sunny days and warmer weather? MSU Latinx Film Festival, or. . .All-University Awards announced, MSU honors faculty and staffJan 23, 2020MSU will honor faculty and staff members with a variety of distinguished. . .‘Who Is a Citizen?’ contest to award seven $500 prizesJan 22, 2020The Creative Writing and Film Studies programs within the Department of. . .
Five things to know the 2020 presidential primary electionsFeb 26, 2020Super Tuesday is quickly approaching and the predictions are ramping up. . .Madeleine Albright coming to Wharton CenterFeb 19, 2020Former Secretary of State Madeline K. Albright will be speaking to a. . .Will bold landmark election ruling improve Malawian democracy?Feb 11, 2020The Constitutional Court in Lilongwe, Malawi, recently delivered its. . .Michigan residents feel upbeat on economy, less so on TrumpFeb 04, 2020According to the latest State of the State Survey, Michiganders are more. . .Polarization helps Congress pass billsJan 30, 2020Research from MSU and the Max Planck Institute for Demographic Research. . .
WKAR to stream MSU fall commencement ceremoniesDec 09, 2019For the benefit of friends, family and Spartan fans around the world,. . .Emily Osika: Combating counterfeitsNov 13, 2019After interning for a year and exploring different counterfeit schemes,. . .Student named Forbes Under 30 scholarOct 23, 2019Arzelia Williams, a student in the Residential College in the Arts and. . .Summer economics program promotes inclusivityJul 31, 2019The American Economics Association, or AEA, Summer Program concluded its. . .Arzelia Williams: When perceptions are not realityJun 18, 2019I soaked in the dry air, stepped into the sand and took in all the. . .