Frank Telewski: Every Spartan tree has a story

Frank Telewski is a professor of plant biology and curator of the W.J. Beal Botanical Garden and Campus Arboretum at MSU. His research focuses on tree growth and response to environmental stress.

Shortly after arriving on the MSU campus in January of 1993 to assume the duties of Curator of the W.J. Beal Botanical Garden and Campus Arboretum, I began to immerse myself in the diversity and long history of the plant collections that grace the MSU campus. Of special interest to me are the campus trees.

One of the first assignments I faced here at MSU was to reconstruct and evaluate the Beal Arboretum. This is the group of trees that were planted by professor Beal beginning in the fall of 1874 between present day Campbell and Mary Mayo Halls.

Professor Beal started this planting as part of an experiment to understand how to grow trees and to demonstrate to the residents of Michigan that it was possible and important to grow trees. My work on this arboretum was to verify and establish the historic and collections value of this planting in order to preserve it from future construction. I was honored to have participated in such a role and that this area is now properly recognized for its contribution to Michigan forestry and the national program to encourage the replanting of our harvested forests.

Over the course of the next two decades, I endeavored to better understand and preserve many campus trees in collaboration with other academics and support staff. I also have enjoyed giving interpretive tours of the campus trees to provide others with a perspective of the plantings.

One of the frequently asked questions during tours or just generally when campus trees come up in conversation is, “What is the oldest tree on campus?” For a number of reasons, that is not an easy question to answer. I know from my research of historical records that trees were first planted on campus shortly after it was founded in 1855. For example, the Norway spruces surrounding Beaumont Tower (the former site of College Hall) were planted in 1865.

I also know from historic photographs of College Hall and Saint’s Rest that some trees of the original forest that covered what today we know as the Historic Oval remained. These trees were very tall and spindly as they were once part of a dense forest. Based on these photographs, I had assumed they were relatively young, maybe 50 or 100 years old at the time building began on campus. With this information, I estimated that the oldest campus trees to be maybe 200 to 250 years old.

Professor Beal wrote in his history of MAC in 1915 that these tall and spindly trees left growing in the Oval after clearing were “topped” by Charles E. Hollister, class of 1861. Hollister told professor Beal that he was the one who, when a student in the late 1850s early 1860s “cut the tops off many of the native trees on the campus, hoping it would induce them to spread out and improve in appearance.”

Professor Beal wrote: “Later years proved the folly of this operation, for the trees had become old and feeble and were making slow growth. Many of them died and from time to time were removed.” We can still see some of these originally topped trees that survived growing on campus some 150 years after they were pruned. One of these trees, a large white oak, was growing next to the 1900 watering trough located between Linton Hall and the MSU Museum. 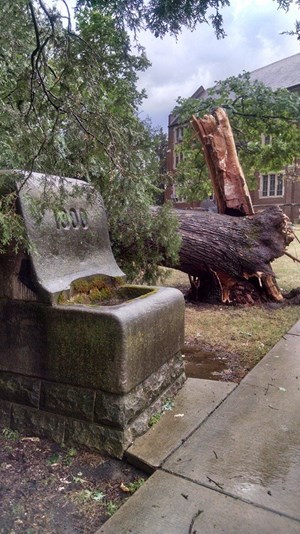 On the afternoon of July 8, MSU’s campus was hit by a very strong thunderstorm with winds in excess of 65 mph. Shortly after 5 p.m., I began to survey campus for damaged trees and called our campus arborist, Paul Swartz, to inform him we experienced significant damage to the campus arboretum including the loss of the big old white oak near Linton Hall.

The big old tree’s center was mostly rotten near the base where some of the roots had been damaged by the installation of a sidewalk near its base years ago. Likely, complications of the decay and roots lead to this tree being blown over.

While investigating the downed tree, I noticed the remains of a sheet metal steel cap that had been placed over the old topped wound which had been made in the 1850s/1860s . The cap was to protect the wound from decay. I immediately knew this was one of the original trees to the campus and that this tree was likely more than 200 years old. What I was about to find out would shock and amaze me.

East of the Mississippi River, we get excited if we know a tree is more than 400 years old or 500 years old. The oldest trees I am aware of here in eastern North America are the white cedars of the Niagara Escarpment, which exceed 1,000 years in age. Here in Michigan, we marvel at the 500 year old white pines at Hartwick Pines State Park or the 500-year-old white cedars growing on South Manitou Island. But how old are the oldest trees on the MSU campus? Would you believe…!

That Monday morning after the windstorm, Paul Swartz and his crew of certified arborists began to remove the fallen giant. About 15 or so feet up the trunk, the wood was partially solid through the center of the tree. Paul provided me with a cross section of the tree so I could analyze the growth rings and obtain an estimate of this tree’s age.

After allowing the section to dry, I sanded it and began to count the rings out from the center. There were 100 rings, 150 rings, then 200 rings and I was barely half way to the bark! Then 250 rings, 300 rings and still more decades to count. When I reached the bark I had counted 347 rings! Each ring usually represents a year’s growth. To confirm and verify the actual age of this tree I will need to apply the methods of dendrochronology (tree ring analysis) that I use in my research studies.

I also obtained several pieces of partially decomposed wood from the base of the tree in which I can identify growth rings. By matching up the pattern of wide and narrow growth rings, I hope to determine more closely the actual age of this tree. There is no doubt in my mind this tree is older than 347 years. It may well have germinated in the forest in the early to mid-1600s!

If only this tree could talk. It survived the clearing of the land for our campus, witnessed the construction of College Hall and Saint’s Rest. It survived the fire which destroyed Saints Rest and paid witness to every Spartan ever on campus. This tree is a true Spartan Sentinel. In fact, this tree was not killed by the storm. A small section of the tree with a branch remains intact and will be protected as it continues to grow next to the 1900 water trough. There is little doubt in my mind that we have other sentinels watching over our campus, 300- to 400-year-old trees still growing on our campus today. This is one of the reasons why I am passionate about trees.

This is one of the many reasons we need to protect our campus trees. These trees can be older than any of us and if we and subsequent generations of Spartans continue to provide these trees and the trees we plant every year with respect and care, 300- to 400-year-old trees should never be unusual for future Spartans and MSU’s campus. Note: Some people may ask, “Why not remove a core from the remaining trees to determine how old they are?” Sadly, many of the older trees are hollow or their centers are decayed similar to the tree in this story and coring the tree would not provide an answer to the question how old are they.